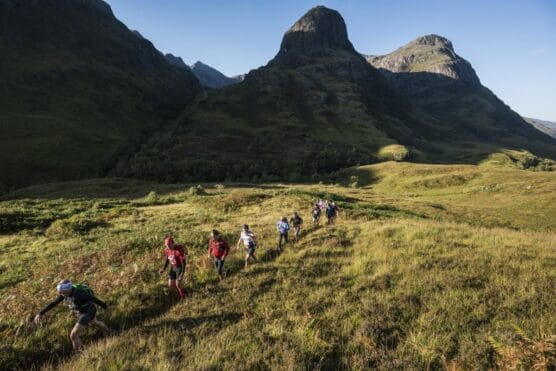 You might feel like you’re William Wallace of Braveheart fame tromping through the meadows and mountains of Glencoe Valley in the Scottish Highlands, which the race organizers say is a true endurance test. “Make no mistake this is a serious challenge in a remote but spectacular location that will test your fitness, robustness and resilience to the limit,” they add, as it takes you over mountain ridges with names like the Devil’s Staircase and Aonach Eagach Ridge, where they add you’ll be “rewarded at every turn with views of some of the most stunning and dramatic mountains in the Scottish Highlands.”

If you’re familiar with the scenery in last year’s PBS series All Creatures Great and Small, then you’ll love what you’ll see along the dirt roads lined with stone fences, at this summertime race. Starting in Rothbury, which lies about a two-hour drive from Edinbugh, this half marathon unfolds through the region known as the Coquet Valley, a wild, remote (and hilly) area where the River Coquet runs from the Cheviot Hills to the North Sea. You’ll run an out-and-back course through the countryside just outside Rothbury, taking in panoramic views all the way.

Isle of Skye Half Marathon

Surrounded by hills and cliffs that overlook a harbor where you can find breathtaking views of Loch Portree below, this small coastal town in Scotland’s Inner Hebrides plays host to this popular race, which sells out in advance every summer. You’ll follow an out-and-back route along closed roads — with truly magnificent scenery, as well as a peace and tranquility you won’t find at most other races.

A stunningly scenic (and mostly downhill) run along the shoreline of the Firth of Forth in Scotland’s capital city, through what’s known as the East Lothian Golf Coast, home to more than 20 links golf courses. The race starts at the pleasingly convenient time of 11 a.m. at Edinburgh’s Meadowmill Sports Centre, and from there heads along inland roads for the first few miles, descending as you make your way to the coastline at Prestopans Beach. There’s a brief out-and-back there, and then the rest of the race unfolds entirely along the Firth of Forth’s southern shore, all the way to the finish line where the horses race at Musselburgh Racecourse.

Will you see Nessie? “Maybe aye, maybe nae,” say the race organizers, who’ve put together one of the world’s best-loved running events. Some 8,000 runners come out each year to run this point-to-point race alongside this freshwater lake in the Scottish Highlands, perhaps to catch a glimpse of the famed Loch Ness Monster, but also to take in the route’s stunning views and the friendly, low-key atmosphere. It’s run at a time of year when summer is giving way to fall, so the leaves are just beginning to turn but the trees are still thick with foliage, and you can see the tops of the mountains that surround the lake off in the distance. The marathon — there’s no half — follows a downhill over the first few miles and a long, flat stretch between miles 10 and 18, a few rolling hills over the last few miles and then a finishing stretch along the River Ness.

Run with the Wind Half Marathon

Run through this picturesque town along Scotland’s River Avon, just 18 miles from Glasgow, at this race — which normally takes place in May, but has been moved to November this year. You’ll need to be dressed for chilly, windy weather, as the course will run through “exposed, elevated terrain,” organizers say, adding that it also features scenic stretches through woodland areas and along rolling rural roads, and stretches past the Whitelee Windfarm, where you can take in jaw-dropping views into the Clyde Valley basin.

Run through the largest city in the Scottish Highlands at this springtime race, known for its majestic 19th-century castles as well as for being the home of the Gaelic king Mac Bethad Mac Findláich, later immortalized in Shakespeare’s Macbeth. You’ll run long stretches of the race through the city along the River Ness, which flows from nearby Loch Ness, starting along the riverside at Bught Park. From there, you’ll run past Inverness Castle on the way into more rural areas just outside the city, before later returning back into Inverness on your way to the finish line at Queen’s Park Stadium.