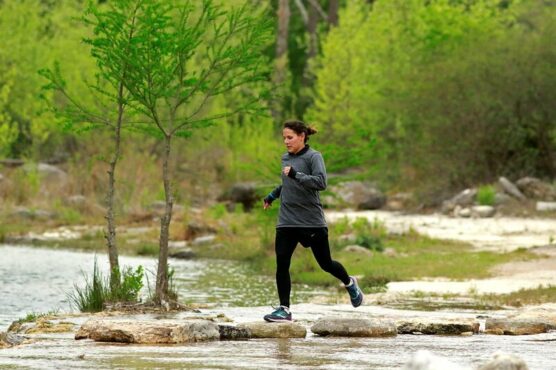 A runner makes her way along the trail route at Texas’s Headwaters of the Frio Half Marathon.

“My positive self-talk is usually me flashing back to the training I’ve done — the workouts that went well and showed me that I’m ready to accomplish whatever the day’s task is. If I’ve got a tough 2-mile stretch in a race, I’ll think back to a great 2-mile repeat at Buffalo Park in Flagstaff and I’ll remind myself, ‘I’ve done this in practice, so just do it again out here on race day.’”

A run through the forests of Tyler State Park, whose 13 miles of single-track trails are shaded by woodlands filled with 100-ft.-tall pine trees, and where you can go for a swim in the spring-fed lake after you cross the finish line. Part of a race series (known as the Eco Series) in state parks and beaches around Texas, the event will also a host a 100K, 50K, 10K and 5K in addition to its half marathon-ish distance, a 25K (which actually works out to just over 15 miles).

Run where wild horses roamed for hundreds of years along this barrier island on the Texas Gulf Coast. Starting from the Beach Lodge on Mustang, you’ll run this out-and-back half entirely along the beach, feeling the salty sea air as the wind whips through your hair. One hundred percent of the race is on the beach, and there’s almost no elevation gain or loss — this thing is pancake-flat the entire way. If you’re feeling you’re not up for 13.1, the race also offers a 5K and 10K; if you’re up for more, there’s a full marathon, 50K and even a 50-miler.

One of the oldest and most popular half marathon events anywhere in the country, the race locals once called simply “The Half” marks its annual running this fall with a route that unfolds around the entire circumference of 1,015-acre White Rock Lake, one of the crown jewels of Dallas’s urban parks system. Thanks to its location next to the lake, most of the race is very flat — there’s a climb of only about 100 feet between the start and the half-way point of the course, and its four-hour time limit means it’s open to walkers as well as runners. (There’s also a 5K that starts in Norbuck Park at the northern end of the lake, and runs down the lake’s northeast corner and back.)

Run through the Texas Hill Country about 50 miles northwest of Austin, where you’ll get to trek through wide-open countryside in this town that’s home to about 6,000 people. Starting from Mustang Stadium at Marble Falls High School — where you’ll cross the finish line on the running track inside the stadium — this race takes you along the “road less traveled,” organizers say, on rural highways that run atop tree-lined ridges along paved country roads. There won’t be many spectators out on the course, but you’ll get to take in awe-inspiring views of this region, just a few miles north of the winding Colorado River.

While only the 100-miler and 100K were open at this writing, organizers are offering a waitlist for the 25K, 50K and 5-miler at this beautiful trail run through Dinosaur Valley State Park, which lies roughly an hour’s drive southwest of Fort Worth. You’ll run through lots of rocky, hilly terrain filled with soft dirt and tree roots, where some of the first dinosaur footprints to be discovered in North America were found, here along the edge of an ancient ocean.

Named for the rock formation commonly found here in southwest Texas, this trail race unfolds through Colorado Bend State Park, a place known for its waterfalls, caves and plentiful trails, about a two-hour drive from Austin. You’ll have your choice of a half marathon, 50K, 100K or 150K races, as well as a youth trail run for kids age 12 and under. Organizers say the route is designed to offer runners “a beautiful and difficult trail reality,” adding that, “like the Tinaja out in the wild, we hope this weekend provides you with something magnificent…giving you something you need.”

Named for the mosaic of people its organizers are encouraging to come out and run — “we’re all different sizes, shapes, colors, styles, ages… but when we join together for a common goal, we create a beautiful picture together” — this race on the outskirts of Austin unfolds along the trails at Indian Mound Ranch. You’ll run through open pastures and along bluffs overlooking the San Gabriel River, with plenty of twisty single-track trails through the ranch property. There will be distances for just about every runner — 1-mile, 2-mile, 5K, 10K, 15K, half marathon, full marathon and 50K.

8) Headwaters of the Frio Half Marathon

The challenging and rugged terrain of this isolated ranch nestled deep in the Texas Hill Country is the setting for this trail race, which takes place on the trails of the 7,000-acre Big Springs Ranch for Children, which provides support and safe haven for abused and neglected children. The race will take you “to the top of ridges and descend to river valleys, traverse canyons, forests and meadows, ford streams and pass Big Springs at the headwaters of the Frio River,” organizers say, adding that you’ll even trek through a stretch where you can run in the footsteps of dinosaurs — through a pair of dry riverbed areas where dozens of dinosaur tracks have been preserved.