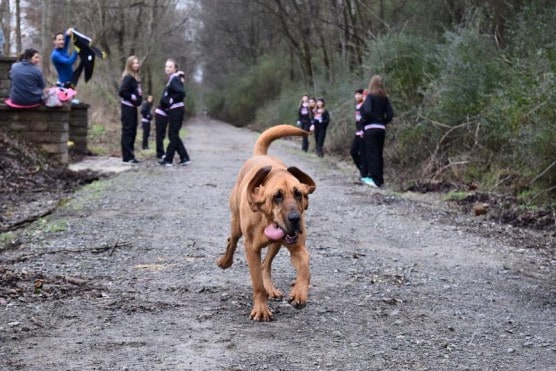 Photo by Elkmont Half Marathon/Facebook

Most dogs love to run, but few probably love it as much as a two-year-old bloodhound named Ludvine, who “entered” a half marathon in Alabama. And finished seventh.

Though it certainly sounds fishy, the story is completely true. The adorable dog owned by April Hamlin of Elkmont, Ala., which lies just northwest of Huntsville, apparently wandered away from home the night before the race this past weekend.

“We had let her out of her pen the night before and that’s where she ended up… the race was on her own volition, I found out afterwards:)” Hamlin wrote on Facebook the day after the Trackless Train Trek Half Marathon, which had its inaugural running over the weekend.

She was prone to running around town on her own anyway, so joining up with the runners during the race probably didn’t seem like anything out of the ordinary. To the dog, that is.

“She’s laid back and friendly, so I can’t believe she ran the whole half marathon because she’s actually really lazy,” Hamlin said in an interview with Runner’s World.

Ludvine was with the runners from the start of the race, so she really did run all 13.1 miles, according to a local resident named Gregg Gelmis, who took photos of her throughout much of the course.

The dog was even in second place around the half-way point of the race, he told TODAY.com. “The next time we saw [her, Ludivine] was at 8 miles in the aid station,” he said. “By this time she had fallen back to fourth place, but still looked good.”

Posted by Elkmont Half Marathon - The Trackless Train Trek on Monday, January 18, 2016

See much more at TODAY.com and Runner’s World.

Next post: 12 Great Races for the First-Time Half Marathoner