If you’ve ever traveled to San Francisco and driven through or just walked past the gorgeous landscape that is Golden Gate Park, then you know why Runner’s World magazine ranked San Francisco’s Kaiser Permanente Half Marathon & 5K one of the country’s most scenic half marathon races.

From the long, expansive meadows on the eastern end of the park to the beachfront areas along its coastline areas, Golden Gate Park is one of those can’t-miss San Francisco places to see, and forms a gorgeous backdrop for the race.

Runners start the half marathon within the park on Strawberry Hill near John F. Kennedy Drive & Stow Lake Drive, just a block or so down from Park Presidio Boulevard. From there, the out-and-back course for the race takes runners eastward toward the edge of the park along Kennedy Drive, and then outside the park through the adjoining neighborhoods for a quick out-and-back along Fell Street, with a turn on Baker and then Oak Street back toward the park.

After re-entering the park on Stanyan Street, runners then proceed west along Kezar Drive for a brief stretch before turning onto Bowling Green Drive, then Middle Drive and then South Drive before joining back up with Kennedy Drive along Teagarden. Through the park, the course is paved and mostly flat and fast, and once runners make it back onto Kennedy Drive, they follow a long stretch along this same road, all the way to the beachfront areas of the park along the Upper Great Highway.

The run along the Great Highway is perhaps one of the most majestic of any road race in America, combining breathtaking oceanfront views with the Golden Gate Park over runners’ shoulders and the Golden Gate Bridge in the distance. Once the race course passes Sloat Avenue, runners then approach the turnaround point in front of the San Francisco Zoo and the Presidio, where they turn around and head back up the Great Highway, taking it along JFK Drive to the finish line on South Forks Drive.

The race is limited to 10,000 entrants, so runners thinking of taking part in the event are encouraged to sign up early. More than 6,100 runners crossed the finish line at the race’s 2016 running, including more than 4,000 finishers in the half marathon alone. 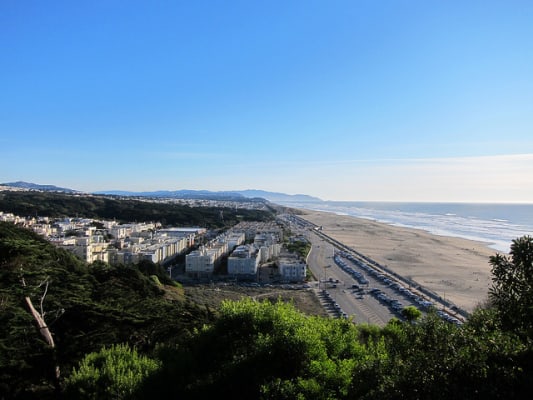 Late winter weather can be cool and wet in San Francisco, as February temperatures average between 49°F and 61°F. Rainfall is always a possibility this time of year, as the area sees an average of just over 4.1 inches of precipitation, making February its second-wettest month of the year.

See the race route map for the Kaiser Permanente San Francisco Half Marathon.

To reserve your spot in the late winter 2023 running of the Kaiser Permanente San Francisco or 5K race, register online at the official website below.

Ever run in the Kaiser Permanente San Francisco Half Marathon? Share your impressions here, or post your review in the Comments box below.