More than 10,000 runners, walkers and wheelchair athletes came out in 2017 to trek the streets of San Jose, the unofficial capital of California’s Silicon Valley, at the Rock & Roll San Jose Half Marathon, which will celebrate its 17th annual running in the fall of 2023 with both a 13.1-mile half marathon and 10K on Sunday, and a 5K on Saturday.

With its mostly fast and flat course — the elevation for the race starts at about 90 feet above sea level and never gets higher than about 110 feet above sea level during the race — the event has become a favorite for both California-based runners looking to record personal bests as well as participants from around the country who want to enjoy the city’s sights, sounds and the live music and entertainment of this energetic big-city race along the route.

The race begins in downtown San Jose at the corner of West Santa Clara Street and Almaden Avenue. From there, the race course takes participants first through the downtown area, along 11th, 4th and 2nd Streets, and then along The Alameda.

This stretch takes runners westward, into neighborhoods that include sights like San Jose’s Municipal Rose Garden and other urban parks, and past stretches of the campus of San Jose State University and the Santa Clara Catholic Cemetery.

Throughout the course, as past participants of other “Rock and Roll”-themed road races around the country (in places like San Diego, Virginia Beach and other cities) know, there will be live bands playing for runners, as well as cheerleading stations where spectators can cheer on their friends and family running in the race. The course will close after four hours, so race organizers note that prospective runners should be able to complete the course within this time limit.

The finish line for the race lies just a few blocks from the starting line, at Plaza de Cesar Chavez Park. As one of the first year’s finishers (HalfMarathons.Net reader Brian H., a local resident) described the race and the finish:

“I ran the inaugural race here in 2006 and it was a great Half Marathon. You run through downtown and out through residential areas, running through much of San Jose that I have never been.

“Very fast paced and flat course, all run on paved roads. Bands are peppered throughout, which adds a nice ambience, and there were a lot of spectators cheering you on,” he added.

“Volunteer and support staff were wonderful. The expo before the race and also at the finish line were set up great. You cross the finish line and there is plenty of ice cold water, water soaked towels and mister system right there, and then you continue on for food and so on. Very well run and I will definitely run again this year.” 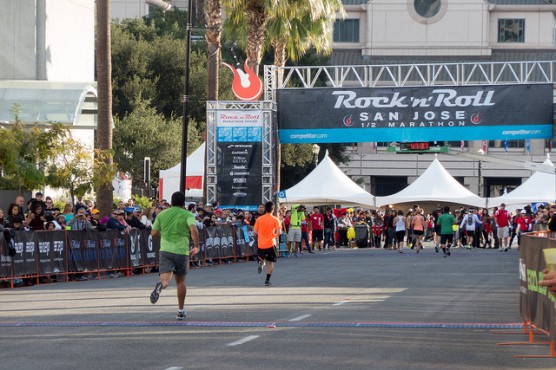 The finish line at the 2013 Rock ‘n’ Roll San Jose Half Marathon. (Photo by Don DeBold/flickr)

Located about an hour’s drive from San Francisco, the city of San Jose tends to experience generally warm, dry summers and mild, wetter winter seasons. In October, record temperatures here have reached as low as 36°F (in 1971) and as high as 101°F (in 1987).

To reserve your spot in the fall 2023 running of San Jose’s Rock & Roll San Jose Half Marathon, register online at Active.com here.

Ever run in the Rock ‘n’ Roll San Jose Half Marathon? Share your impressions here, or post your review in the Comments below.