The desert landscape of Southern Nevada — combined with majestic views of one of the most awe-inspiring man-made structures anywhere in the world, the Hoover Dam — are both on display at this annual mid-December race, part of a series of running events staged throughout the year.

Runners in both the full and the half marathons begin their race at 8:00 AM and 8:30 AM, respectively, near the campground and parking lot of the area known as Boulder Beach, which looks out onto the shores of Lake Mead.

From there, runners follow the half marathon route south along Lakeshore Road toward the Nevada Highway (Highway 93) for the opening stretch, and then head onto the paved trail that parallels the road, known as the River Mountains Loop Trail.

Completed in 2010, the River Mountains Loop Trail is a 35-mile hiking, walking, running and cycling trail that connects the local area known as the River Mountains in the Lake Mead National Recreation Area, as well as Hoover Dam, Boulder City, the nearby town of Henderson and parts of Las Vegas Valley.

This 12-ft.-wide trail is paved, and takes runners from just off Lakeshore Road all the way down to the intersection with the Historic Railroad Hiking Trail, a gravel trail that runs along Lake Mead’s southern shores and takes runners out toward the highlight of the race.

(MORE: 10 half marathons that finish on the beach)

Along the route to this point, runners will also run through a number of small tunnels along the trails, which originally were constructed as railroad tunnels in the early 1930s and were used to transport men and materials back and forth between Boulder City and the Hoover Dam, which was then in the process of being built over a period of five years, between 1931 and 1936, in the depths of the Great Depression.

The dam’s distinctive pale concrete arch is known across the nation, and runners get their chance to see its Nevada side — it connects Nevada with Arizona — after following the Historic Railroad Hiking Trail all the way to the Hoover Dam parking lot.

Once here, runners need to follow the race guidelines carefully, as there is a series of switchback paths down from the hiking trail to the top level of the parking lot, overlooking the dam. Runners head out and make loop around this upper level, where they’re treated to one of the most magnificent views of any running race in the country.

After they make their way back up the switchbacks to the railroad trail, runners then retrace their steps along the route they’ve just run all the way back toward Boulder Beach. There’s an additional section of the route just past the Lakeshore Road exit for Boulder Beach, to ensure that runners get in the half marathon’s full 13.1 miles. 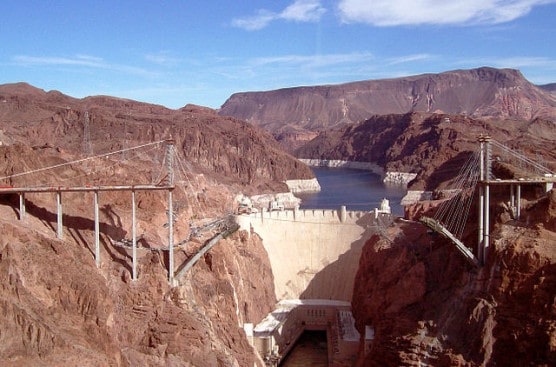 The Hoover Dam. (Photo by Stubbleboy/Wikimedia)

Located in Nevada’s southernmost corner, just over 25 miles southeast of Las Vegas, Boulder City typically experiences weather much like that of its larger neighboring city to the west, which is to say mild to moderately warm weather in the mid-fall season, and very dry conditions year-round.

In December, temperatures range between the upper 30s and the low 50s, while rainfall totals average just under half an inch for the month.

See the race route map for the Hoover Dam Half Marathon here.

To reserve your spot in the 2022 running of Boulder City’s Hoover Dam Marathon, Half Marathon or 10K race, register online at the event website below.

Ever run in the Hoover Dam Half Marathon? Share your impressions here, or post your review in the Comments below.