Held in conjunction with the Davidson Lands Conservancy’s Green Day festival and exhibition — a day filled with live music and exhibits that highlight companies, products and organizations that employ environmentally sustainable practices — the Run For Green race draws several hundred runners each fall here to the Piedmont region of North Carolina.


Like the 10K and the 5K, the half marathon follows an out-and-back route that starts and finishes on the Village Green in downtown Davidson, which is home to more than 9,000 year-round residents as well as the student body of Davidson College, a liberal arts college that educates more than 1,800 students every year.

If they haven’t already before the day of the race, runners will be able to register for any of the three races at the Village Green before the race starts (depending on space availability).

From there, runners then head out onto a course that winds southeast from town, along a route roughly in parallel with the South Prong of the West Branch of the Rocky River, which flows right through Davidson and Mecklenburg County.

The first couple of miles along South Street and Avinger Lane lead to turns onto River Road and then Patrick Johnson Lane, followed by a roughly mile-long stretch along the paved nature trail that stretches between Hudson Place and Robert Walker Drive.

This stretch of the course, like most of the race, features rolling hills throughout and follows an overall gradual downhill until about the mile 3 marker, when the course flattens out some.

Over the next few miles, runners make their way through residential neighborhoods that line the golf course fairways of the River Run Country Club.

Runners wind their way along River Falls Drive and River Ford Drive before turning onto the West Branch Greenway, the newly-constructed riverside parks trail that winds along the West Branch of the Rocky River.

Runners follow the greenway out for about three quarters of a mile to the turnaround point, and then head back along the greenway along the route they’ve just run, and then back through the River Run neighborhood.

They’ll run most of the same route they ran earlier in the race in reverse, all the way back to River Road. Instead of turning left onto Avigner, they’ll continue on along River Road back into downtown Davidson for the finish line back at the Village Green. 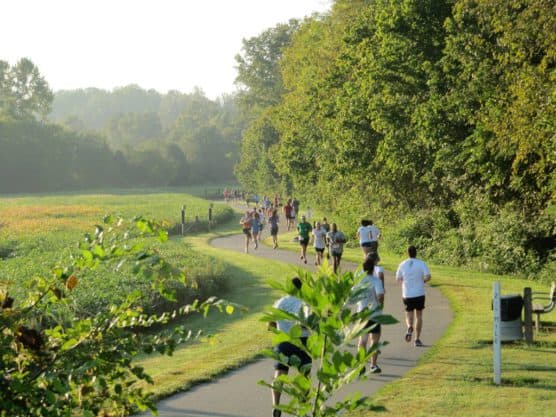 Located along the eastern shore of Lake Norman in central North Carolina, just over 20 miles north of Charlotte, Davidson typically sees mild to moderately warm weather in October, when temperatures range from the mid-40s to the high 70s.

See the race route map for the Run for Green Half Marathon here.

To reserve your spot in the 2022 running of Davidson’s Run for Green Half Marathon, 10K or 5K race, register online at RunSignUp.com here.

Ever run in the Run for Green Half Marathon? Share your impressions here, or post your review in the Comments below.