The streets are dark and silent at 5:45 a.m. It’s 19 degrees and the wind is whistling.

A voice shouts “Alright everybody – circle up!” Out of the darkness pop 30 bundled-up bodies – hopping up and down, left and right, to keep warm.

The silent morning turns into a party as the group exchanges high fives, hugs and excited jabbering on the corner of 2nd and E street in northwest Washington, D.C.

It’s freezing, dark and early – but it’s clear there is no place these runners would rather be than surrounded by each other – team Back on My Feet. I’ve only just met them, but I’ve already been patted on the back, hugged and complimented twice on my hot pink running shoes.

There is no room for negativity in this group. Back on My Feet is a national nonprofit in 11 cities across the country that uses running to help the homeless transform their lives.

“We haven’t set out to create runners per say,” says Kelly Andreae, executive director of Back on My Feet DC. “We are using the team approach of running to build skills like goal setting and teamwork. It gives them a chance to grow and accomplish great things, which translates into other areas of their lives.” 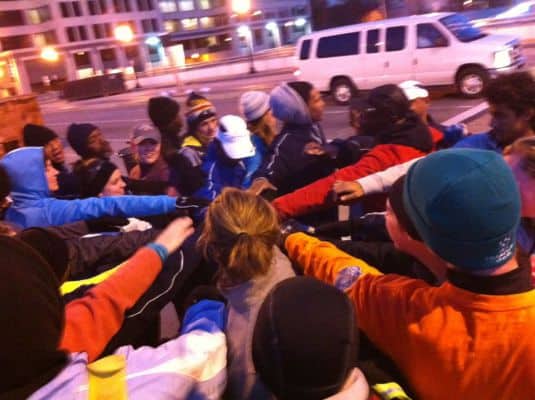 A group of DC Back on My Feet runners join in for a morning cheer in early November.

“They are back on their feet in no time at all,” Andreae says.

Back on My Feet was started in May 2007 at 5:30 a.m. when founder Anne Mahlum, then 26, was running on the streets of Philadelphia. On her morning runs, she often passed several men outside of Sunday Breakfast Rescue Mission, a homeless shelter. Thinking of how running changed her own life, Mahlum wanted to see if it could change theirs.

Mahlum got permission to start a running club with nine men at a shelter.  Through donations, she was able to provide them with running shoes, socks and clothing. But she had one requirement: a dedication contract.

By signing the contract, the men committed to showing up every Monday, Wednesday and Friday at 6 a.m., being on time, respecting themselves and supporting teammates. That theme stuck. Today, Andreae says DC’s Back on My Feet follows that same contract.

“We don’t want them to focus on ‘I didn’t run fast enough or far enough, but instead the positive accomplishments of putting one foot in front of the other,” Andreae says.

On the morning run I joined in on that was very clear. Runners high-fived each other at every turn. A blind runner, assisted by a volunteer drew a roar of cheers from each clump of runners he passed.

The silent morning was again filled with excitement as runners yelled “Lookin’ good!” “You got this!” “Yeah team!” with excitement like it was the first time they’d ever hit the streets together. Most of them have been running together for months. 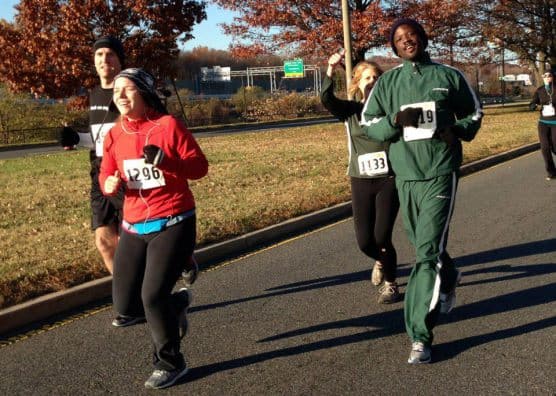 Back on My Feet team members racing at the Run for Shelter in Alexandria, Va., earlier this month.

Many members of Back on My Feet attribute their success to that contract and the fact that for the first time in a long time, someone was relying on them. If the members follow the contract and maintain 90 percent attendance  for a few weeks, they have access to career and financial assistance.

Hermon Blount, 50, of Washington, D.C., says that accountability helped him prepare to get a job. Now he works two.

“My life was rough. I was just lost,” Blount says. “Back on My Feet, it put stability back into my life. I had to get up in the morning. I had to be reliable.”

Blount has now been drug and alcohol free for three years. He’s run one full marathon, four half marathons and he is busy planning his next big race. “I have 1,135 miles since I joined,” he says with a smile.

“At first I didn’t think I could do it,” Blount recalls. “I said ‘Do you really want me to run three miles? Don’t you mean three blocks?’”

Once members have run with Back on My Feet for one month, they enter into next step: individualized goal planning, help with resumes and job support.

Back on My Feet partners with SunTrust Bank for a financial literacy program and even offers financial aid, helping cover a down payment for a home, tickets to travel to interviews and new uniforms.

While most members of Back on My Feet are male, there are women-only teams in Atlanta and Boston. Overall, about 30 percent of members are veterans. In Atlanta and Philadelphia those numbers are much higher.

“The program is really effective but it is not for everybody,” Andreae says, noting the organization sees about 10-15 percent of Dedication Contracts go unfulfilled. “This is not the only solution that’s going to end homeless in our community. The key thing is that they are trying.”

For the runners, the changes are physical too.

“These were people that probably never walked a mile for exercise in their lives,” says CEO Mary Fitzgerald. “Our members have stopped smoking, their diabetes is in check, they are losing weight. They are feeling better about themselves.”

Across the nation Back on My Feet is growing. Boston is the largest group, followed by Philly and Chicago. Fitzgerald says the goal for Back on My Feet’s 10-year anniversary in 2017 is to have 10,000 members.

Michael Rodney-Bey scoops up some of the collard greens and turkey he cooked for the Back on My Feet holiday potluck.

Michael Rodney-Bey, 63, was in prison for 23 years. He struggled with alcohol and drug abuse for decades and has been in rehab 11 times.

He has a bank account, he works as a cook at his homeless shelter and ran his first half marathon, the Woodrow Wilson Bridge Half, in October.

Andreae still remembers the sense of hope she felt on her first run with the Back on My Feet team.

“It was intimidating showing up at 5:45 a.m.,” she recalls. “It was dark and I didn’t know anyone. I was nervous. But I showed up, and I was immediately greeted with hugs. The energy and the positivity of the group, I’d never felt anything like that before. I immediately felt like I belonged. Just positivity and love. You just can’t shake it.”

As we closed in to finish our 3-mile, out-and-back run along the National Mall, faster runners were there to greet with a tunnel of high-fives and even more hugging. No one left until the last runner returned.

The runs at Clean and Sober Streets, a Washington, D.C., long-term residential drug and alcohol treatment and rehabilitation center always end with a cheer, but it’s clear the journey has just started: 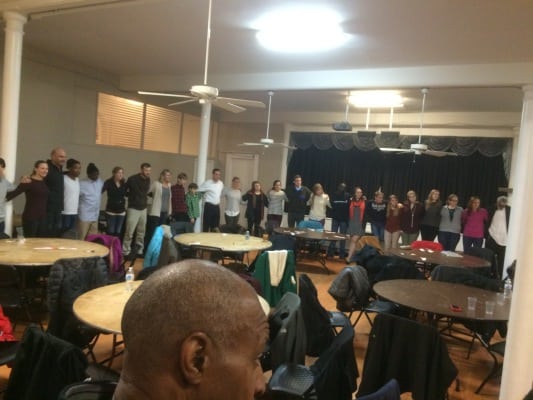 Back on My Feet DC members circle up to share what they are thankful for at a holiday potluck.

Read more about Back on My Feet here.

Previous post: 10 of the Flattest, Fastest Half Marathons on the East Coast