A gorgeously scenic run through the Blue Ridge Mountains that straddle the Tennessee-North Carolina border await runners at the Great Smoky Mountains Half Marathon, which makes its 8th annual running in the late summer along a very gradual climb near the entrance to the national park just outside Knoxville.

Runners should note that this race isn’t actually run inside the confines of Great Smoky Mountains National Park — while the National Park Service allows some running events to be run inside its parks and wildlife areas (like Death Valley), in many cases the environment is too sensitive to allow events like these.

However, you’ll get to experience the feel for what the park is like just outside its gates, as you’ll cross the finish line less than two miles from the park entrance on the Tennessee side, and will get to see the “smoky” mountains that surround Maryville and Townsend all around throughout the race.

The point-to-point course for the race begins just outside Maryville in the small community of Hubbard, where runners will leave the starting line from Heritage High School. From there, they’ll spend much of the next several miles on Old Walland Highway, which will carry them through the small town of Walland on the way to nearby Townsend, where the race will finish.

Along the way, runners can expect a very gradual climb over the race’s 13.1 miles, punctuated with small rolling hills throughout. The climb will probably be barely perceptible for large parts of the race, as you’ll start at an elevation of about 880 feet above sea level and finish at just under 1,100 feet — an elevation gain of only about 130 feet during the race.

The race unfolds mostly along the Old Walland Highway, Cameron Road and Webb Road all the way into Townsend, where the race will finish with a short stretch along the Townsend Historical Trail to the Great Smoky Mountains Association visitor center, just off the Lamar Alexander Parkway.

Spanning more than 816 square miles across Tennessee and North Carolina, Great Smoky Mountains National Park is the nation’s most-visited park for a reason. The Appalachian Trail passes through it, and it features some of the most unspoiled natural beauty anywhere on the U.S. East Coast — havens like Cades Cove and Clingmans Dome, the highest point in the park, are perennial visitor favorites.

For more info about shuttle transportation to and from the start and finish lines on race day, be sure to check the official race website here. 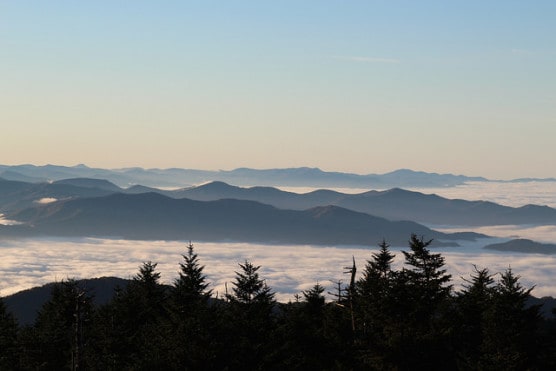 Nestled among the foothills of the Great Smoky Mountains in eastern Tennessee, just a short drive from nearby Knoxville, Maryville typically sees some of its warmest and driest weather of the year in September, which has brought record temperatures here as low as 36ºF (in 1967) and as high as 103ºF (in 1954).

See the race route map for the Great Smoky Mountains Half Marathon here.

To reserve your spot in the 2023 running of Tennessee’s Great Smoky Mountains Half Marathon race, register online at RunSignup.com here.

Ever run in the Great Smoky Mountains Half? Share your impressions here, or post your review in the Comments below.