The flat, wide and paved pathways of the Campion Trail that winds through this city between Dallas and Fort Worth are the setting for the Wounded Warrior Half Marathon, 10K, and 5K a race that runs in the early summer and doubles as a fundraiser for the Semper Fi Fund, which provides support to U.S. Marines and sailors who have been injured in combat after the 9/11 attacks.

Runners start the race along Irving’s West Las Colinas Boulevard near Williams Square Plaza, the home of the famed Mustangs of Las Colinas statue, the bronze sculpture of nine horses galloping across a stream that has become a tourist attraction here and now features its own museum exhibit.

From there, runners head out first on West Las Colinas Boulevard and then turn right onto West La Villita, which they follow east for a loop until they reach the entrance to the Campion Trail, in Keenan Crossing Trail Park.

After they make their way along the path, runners then turn right and head onto the Campion Trail, the 12-ft.-wide paved trail for runners, walkers, bikers and inline skaters that runs roughly parallel to the Trinity River that winds through this area, which is known as the Las Colinas area of Irving.

Runners then stay on the trail as they make their way northward for the next five miles, all the way to the turnaround just past the underpass for Highway 161.

The course then follows the loop around the mid-way turnaround and brings runners back onto the same stretch of the trail they’ve just run, heading south now back along the Campion Trail past Colinas Crossing Lake and Spring Trail Park all the way back down to the exit for the trail onto Riverside Drive.

There’s a final brief loop along the river before runners then turn back onto Riverside and then again onto O’Connor and then run back toward Williams Square for the race finish.

Thanks in large part to the warm weather that is likely to greet runners on the day of the race, the half marathon starts first at 6:45 AM, followed by the 10K at 7:00 AM and the 5K at 7:15 AM. The race’s 2016 running saw more than 1,600 runners cross the finish line in the half marathon and 10K combined. 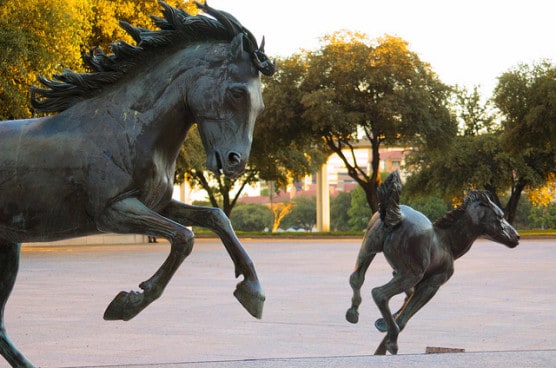 The Mustangs at Las Colinas, photographed in October 2012. (Photo by Bill Chance/flickr)

Located in the northeastern part of the state, in the middle of the metroplex between Fort Worth and Dallas, Keller typically sees warm to sometimes very warm weather in June, which has brought record temperatures here as low as 53 degrees (in 1982) and as high as 112 degrees (in 1980).

See the race route map for the Wounded Warrior Half Marathon here.

To reserve your spot in the 2023 running of the Wounded Warrior Half Marathon, 10K or 5K race, register online at RunSignUp.com here.

Ever run in the Wounded Warrior Half Marathon? Share your impressions here, or post your review in the Comments below.