No Nike Women’s Half Marathon for San Francisco in 2016 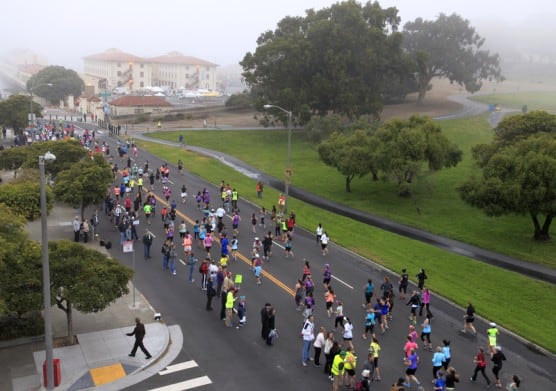 Runners trek the streets of San Francisco at the 2013 Nike Women’s Half Marathon. (© Tatiana Morozova | Dreamstime.com)

All good things come to an end. Well, many of them do.

The end of the road has apparently come for the Nike Women’s Half Marathon San Francisco, which marked its 12th annual running last year with one of its biggest fields ever, with some 25,000 runners crossing the finish line at the city’s Marina Green.

The cancellation was confirmed by a Nike spokesperson, who said this in an email to Runner’s World magazine:

“Although the Nike Women’s Event Series races will not take place in San Francisco in 2016, we’re committed to continuing to create the most innovative, motivating, and exciting running and training events and look forward to announcing new destinations and experiences for the 2016 series early next year.”

That Nike was dropping the race from its worldwide series known as the Nike Women’s Running Series — which boasts events in major cities from Toronto to Seoul — was puzzling to say the least to the San Francisco race’s many devoted fans. Hundreds posted comments on the series’ Facebook page, lamenting that Nike had cancelled the race without any explanation other than that it would search for other cities to host races.

Seriously Nike?! No San Francisco or Toronto?! My heart was set on trying to get into Toronto and SF as a second option. So heartbroken! Hopefully a different Canadian city?!

The race’s cancellation follows Nike also dropping its Nike Women’s Half Marathon DC, which was run only for a couple of years before it, too, was dropped after its 2014 running, even after a record-breaking number of finishers at its last race.

Neither Runner’s World nor Nike had any explanations for the San Francisco race’s cancellation as of this writing, and the magazine noted that the Nike spokesperson said to watch the series’ website for future updates.