Sandwiched between the majestic mountain peaks and ski resorts to the west and the crystal waters of Utah Lake and Provo Bay to the immediate east, this Utah Valley city plays host in the spring to the Provo City Half Marathon & 5K, which takes runners on a tour of both the area’s urban and natural sights and attractions.

Like its late summer counterpart, the Provo River Trail Half Marathon, this race event takes runners along some of the same trails, offering both a fun and challenging course, organizers say. The race is presented by Smile! Center of Utah, and saw more than 900 runners cross the finish line in all races in 2016, including more than 620 in the half marathon.

This point-to-point race starts in the mountains above the city on South Fork Road, and from there heads west and south toward downtown Provo. Runners will stay on the Provo River Parkway for much of the first half of the race, paralleling Provo Canyon Road as it descends from the mountains into the city, losing about 900 feet of elevation over the course of the race’s 13.1 miles.

Runners leave the Provo River Parkway just after mile 8 and head onto University Avenue, which takes them into the race finish at the intersection with Center Street.

The course is considered an excellent early-season preparation run for the state’s number of marathon and half-marathon events later in the year, organizers add, as well as an opportunity to run amongst some its most beautiful scenery.

The course, like the city as a whole, lies within the shadow of Mount Timpanagos, Cascade Mountain and Provo and Freedom Peaks, well known for their hiking and camping and made famous (or infamous, rather) as the onetime hideout of Butch Cassidy and the Sundance Kid. 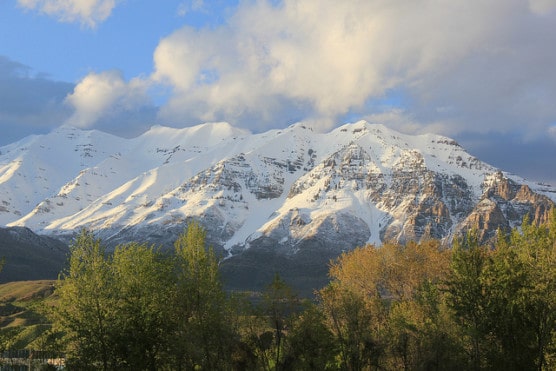 Mount Timpanogos, which looks out onto Provo, Utah. (Photo by Michael Jolley/flickr)

Nestled along the eastern shoreline of Utah Lake in northern central Utah, about 45 miles southeast of downtown Salt Lake City, Provo typically sees cool to warm weather in May, while rainfall totals average just over 2 inches for the month (making May among the city’s wetter months of the year).

See the race route map for the Provo City Half Marathon here.

To reserve your spot in the late spring 2021 running of the Provo City Half Marathon or 5K race, visit the event website below.

Ever run in the Provo City Half Marathon? Share your impressions here, or post your review in the Comments below.

See more races in: May, Utah