Runners are set to experience an elevation drop of more than 3,000 feet as they descend through Big Cottonwood Canyon on their way from the mountains into the city at the Revel Big Cottonwood Marathon & Half, which makes its `0th annual running just before the official start of fall.

The half marathon route starts just past the mile 8 marker of the full marathon route, a few miles west of the Silver Fork Lodge high up in the mountains of the Wasatch National Forest that overlook the city — as the resort describes itself, “just 11 miles away from Salt Lake City but a million miles away in attitude.”

The lodge has a rich history that dates back to the 1850s, when it was first set up as a tent city for workers in the nearby mines; later its trees were used to help build the famous LDS Mormon Temple that stands today in the heart of Salt Lake City.

From the starting line — which lies at an elevation of just over 7,000 feet above sea level — runners head west along the road that leads down through the canyon, Big Cottonwood Canyon Road.

The course keeps runners on this highway for the first 11 1/2 miles of the half marathon, as Big Cottonwood Canyon Road becomes Fort Union Boulevard, which runners will follow all the way to the race finish line, where the road meets South 1300 East.

Along the way, runners will pass through some of this area’s historic places and sights, like the Old Mill whose ruins still stand today in Old Mill Park. 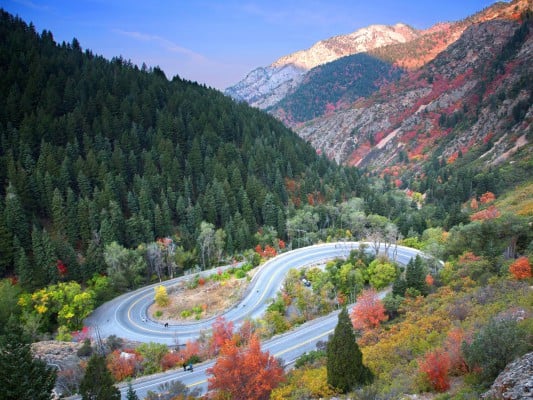 A view of the course along Highway 190 from above, at the Revel Big Cottonwood Half Marathon. (Photo courtesy RunRevel)

Also sometimes called the Granite Mill, it was first built back in 1880 from stone left over during the construction of the Salt Lake Temple, but was later abandoned for decades until it was restored as a dance and music hall in the 1930s, when it drew in thousands of local residents for Depression-era entertainment.

For most of the race, runners also will run beside the waters of Big Cottonwood Creek, whose headwaters start up in the Wasatch Mountains near the Brighton Ski Resort, where the starting line for the full marathon lies.

The creek runs alongside the race course for all but the final mile or so of the half marathon, stretching some 26 miles to where it finally empties out into Utah’s Jordan River. 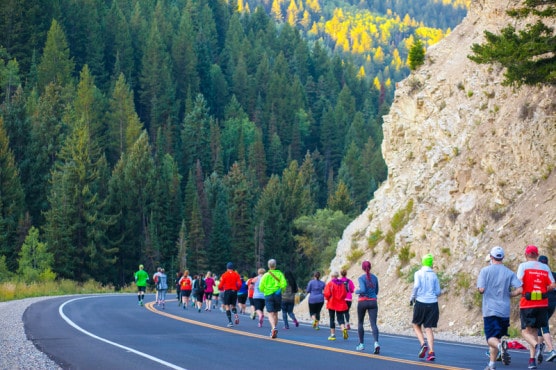 Runners make their way along Highway 190 at the Revel Big Cottonwood Half Marathon. (Photo courtesy RunRevel)

Nestled between the Wasatch Mountains to its east and the Great Salt Lake to its northwest, about 10 miles south of Salt Lake City, Cottonwood Heights typically sees September temperatures that average between 78°F and 55°F, while rainfall totals average just over 2.1 inches for the month.

See the race route map for the Revel Big Cottonwood Half Marathon here.

To reserve your spot in the 2023 running of the Revel Big Cottonwood Marathon or Half Marathon race, register online at the event website here.

Ever run in the Revel Big Cottonwood races? Share your impressions here, or post your review in the Comments below.