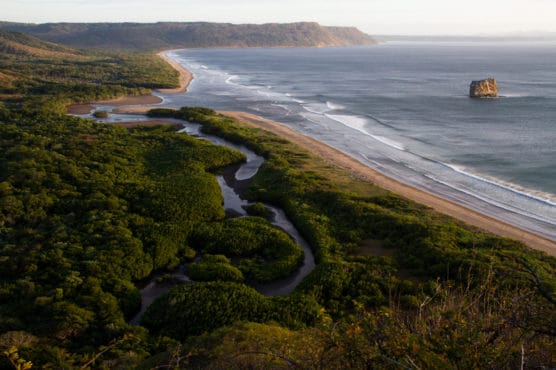 Held in early September, the out-and-back Tamarindo Beach Half Marathon allows runners 3 hours and 10 minutes to finish the 13.1 distance. Held in conjunction with a full marathon, 10K, and 5K, all courses start and end right at the oceanfront. Tamarindo is located on the western side of Costa Rica and runners who enjoy surfing or eco-friendly adventures will want to add this half marathon to their list.

The 22 kilometer Moon Run Adventure Run is 13.67 miles and is run on a loop trail course. Held in early December, this run is not for first time trail runners or half marathoners. It gains 1,400 meters or approximately 4,500 feet in elevation. The 22K runners begin their journey at 2:35 p.m. and will traverse through the breathtaking Monteverde Cloud Forest Biological Reserve, one of the country’s most visited nature and wildlife reserves.

The town of El Castillo is located in very close proximity to the Arenal Volcano and Lake Arenal, and is situated just 10km off the Rainforest Highway between La Fortuna and Nuevo Arenal. Held in early April, runners will travel along a lollipop-shaped course with the out-and-back section in the middle. The 13.1 miles takes runners along Lake Arenal and while the course is mostly rolling, the last few miles features one large climb and one large descent to the finish.

As long as you can handle the heat of early July in Costa Rica, the Corre Caminos Media Maraton is an excellent downhill course. Runners begin at 1,327 meters (4,353 feet) and finish around 1,180 meters (3,871 feet), making it just enough to give runners an extra oomph without burning out their quads. The course begins in the neighborhood of Tres Rios and travels to downtown San Jose and runners of the half marathon can opt to run with a pace group, offered in intervals of 5 minutes from 1:30 to 2:15!

Held in December, the point-to-point Media Maraton Metro Gatorade is one of three race distances offered. The 5K and 10K are approximately $25 each and the 13.1 distance is approximately $30. Runners will begin with a loop around the city of Cartago and travel towards San Jose, finishing in the city of Ayarco Norte. The course is flat in the first half of the race, features a small climb in the middle and a perfect downhill finish just past the halfway mark.

Runners looking for a hilly challenge will want to sign up for the Reto Powerade 21K. The course starts and finishes at the Multiplaza Escazu in San Jose. The 13.1 distance starts with a small descent for less than 2 miles before ascending beyond the halfway point. Runners will reach the highest point of the race at Canal 7 and the last 4 miles is mostly downhill. The late October race is one offered alongside a 5K and a 10K

This event is one of the largest races in Costa Rica and runners who find themselves in San Jose in early December should put this on their list. Held in the heart of San Jose, runners will pass by many iconic landmarks in their journey from Sabana to the Gimnasio Nacional.

Held in early December and with a start time of 5:15 a.m., runners have the best chance to try to beat the heat of Costa Rica with the La Sele Half Marathon. The route is almost all downhill, beginning at Lincoln Square and finishing in the Gol Project, in Bethlehem. With a net downhill of 1,105 feet, racers might even find themselves with a brand new PR.

Sold out for 2018, the popular Lindora Run starts and finishes at the Terrazas Lindora Shopping Center in Santa Ana. This races features climbs in 3 different sections along the course, at the very beginning, before the halfway point, and an uphill finish at the end. Runners who are seeking an extra challenge can sign up for the 5K on Saturday as well and receive two shirt and three medals.

Held in the Limon Province of Costa Rica, the town of Manzanillo is host to a 13.1 mile race in early October. For those looking to explore the forests and all their flora and fauna, the unique environment of this region is a great place to start. The half marathon starts and finishes in town and runners travel down the main street to Puerto Viejo, enjoying a mostly flat route, but enough hills to keep it interesting. Take note that this picturesque place in located in the heart of the Caribbean and the humidity is something to prepare for.

Next post: How to Prepare For Running a Hilly Half Marathon Race