Have you been looking to coordinate your travel schedule with your next half marathon? Or dreaming about a once-in-a-lifetime runcation without leaving the country?

You don’t have to dust off your passport or download a language learning app to explore natural wonders, hidden gems, and national monuments. With these unique races, you’ll travel and explore the United States while meeting a diverse community of runners from around the world.

If you’re excited to return to traveling (and racing!) in 2022 and 2023, here are the half marathons we most recommend. 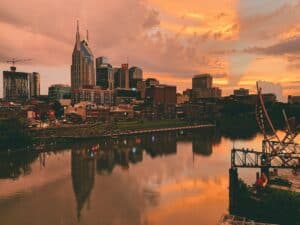 Photo by kortney musselman on Unsplash

Sometimes hailed as the“Las Vegas for Country Music,” there’s more to this city than Broadway—which is known for its country music star-owned honkey tonks and cowboy hat stores.

But there’s another side of Nashville, which is consistently ranked as of the best cities in America to visit. Travel + Leisure describes it as “free spirited and musical.” Does this sound like you?  If you’re looking to run a half marathon this fall—while also  practicing your line dancing and learning what “hot chicken” is— try the Nashville 1/2 Marathon. During the race, you’ll tour everything from Music Row to the riverside Nashville Greenways, a newly constructed system of linear parks.

The Steamboat Half Marathon

Runner’s World named The Steamboat Half Marathon one of the Top 10 Destination Marathons in North America. Steamboat Springs, Colorado is a small skiing town three hours north of Aspen.

The race itself is mostly downhill through the iconic Elk River Valley. If you can’t picture exactly what that looks like, it’s very green. After the race, the Old Town Hot Springs are a popular destination for runners to rest their weary legs. 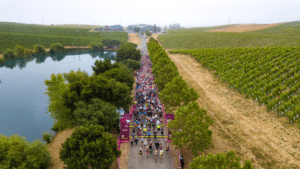 Image via Napa to Sonoma

A visit to wine country should be on everyone’s bucket list. The best way to experience it? Try a thirteen-mile running tour.

This race will take you along the route of a preserved wildlife area, the San Pablo Bay, and the wooded hills of Marin County. The Napa-to-Sonoma Wine Country Half Marathon was also voted as the race with the “Best Finish,” since you’ll cross the finish line by Sonoma City Hall and enter into a festival replete with tasting booths, food, and live music.

Las Vegas is universally known for the entertainment, restaurants, and “The Strip”— the 4-mile stretch known for its iconic resorts and casinos.

The Rock N’ Roll Las Vegas Half Marathon is the only race that shuts down traffic on the Strip as runners drink in everything Las Vegas has to offer, passing by casinos like the Bellagio, the Venetian, Caesars Palace, the Flamingo, the Mirage, Treasure Island, and the Wynn Casino. Because the race starts at 4:30 PM, you’ll end up finishing as the sun sets and the hotels and casinos light the sky. 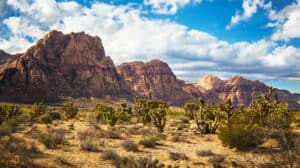 Located only twenty minutes outside of Las Vegas, Red Rock Canyon is among the country’s most notable natural treasures.

The race begins at sunset, so you’ll cover your first miles while watching the sun set over the landscape. You’ll complete the run with the starry sky overhead as the sun goes down, and the lights of Las Vegas glow in the distance. Because you’ll be running at night, you’ll want to be adorned with headlamps and reflective gear.

The Kaua’i Half Marathon 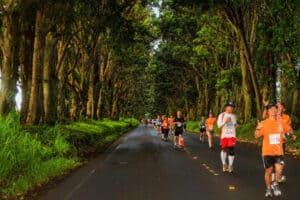 Photo via the Poipu Beach Foundation

You can’t go wrong with a half marathon in Hawaii, but of all the races, the Kaua’i Half Marathon is unbeatable.

The Hawaiian island of Kauai offers one of the most beautiful places anywhere on earth for a running event. Take in the pristine sand beaches, lush jungle-like rain forests, and massive green cloud-covered mountains, whose waterfalls bring the heavy rains that collect on the peaks cascading down to the beaches below.

You’ll want a picture running through the “Tunnel of Trees,” which were planted more than 150 years old by Scottish immigrant cattle ranchers and remain today as a verdant eucalyptus-tree corridor linking Kalaheo with Poipu. 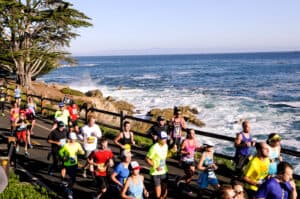 For sheer natural beauty and dramatic coastal scenery, you can’t top the Monterey Bay Half Marathon—especially if you like steep cliffs and the Pacific Ocean.

The half marathon is on a flat, fast course that carries you along the coast the entire time. While you’re visiting, Monterey is also home to the country’s best aquarium, which is celebrated for its living three-story-tall kelp forest. 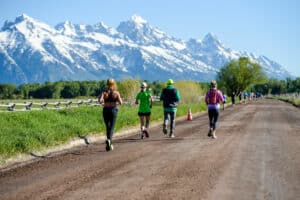 Picture a snow-capped mountain peak. At its base lies unfettered green and yellow wildflowers and a crystal clear lake reflecting the range above. That’s Grand Teton National Park in Wyoming.

After the race, we recommend taking the boat across Jenny Lake, if your legs can handle it.

The New York City Half 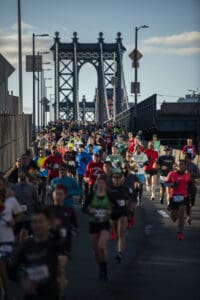 A big race in the Big Apple!

This half marathon runs between the two largest parks in New York City. You’ll  start in Brooklyn’s Prospect Park and finish in Manhattan’s Central Park. To add to your list of can’t-miss destinations, the race will also take you over the Brooklyn Bridge, past the Empire State Building, and through Times Square.

Expect to join a jostling pack of runners and to see high-energy spectators along the course. The race itself sees 25,000 runners, and New York is notorious for having some of the best crowds in the world.

This content was produced in partnership with Run Nash, producer of the Nashville 1/2, Marathon & 5k