10 Half Marathons in Europe’s Smallest Countries 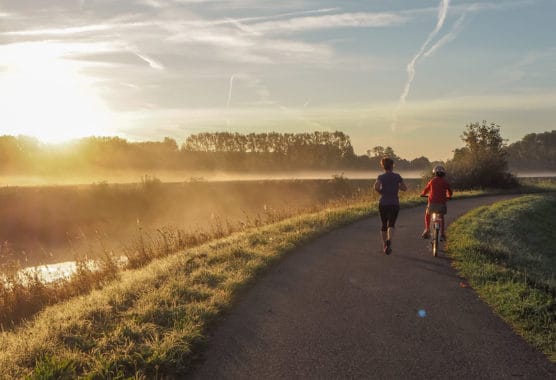 A mother goes for a run with her son on a misty morning in Mechelen, Belgium. (© Shoeke27 | Dreamstime.com)

Situated between France and Spain in the Pyrenees mountains, Andorra is known for its ski resorts and tax-haven status. The SkyRace Comapedrosa consists of two very long climbs with panoramic views of Natural Park of Les Valls del Comapedrosa, and is best suited for advanced trail runners as it features over 7,500 feet of ascent over 13.1 miles.

2) LGT Alpin Half Marathon Plus • Liechtenstein

Located between Austria and Switzerland, Liechtenstein is famous for medieval castles and alpine landscapes. The point-to-point LGT Alpin Half Marathon Plus is actually 15.5 miles or 25K and runs along Rhine River for the first half of the course before ascending into the mountains in the second half, all of which will feature incredible views.

In early June, the country of Luxembourg features a race series that begins at 7 p.m. Runners will follow a course that is mostly out-and-back in Luxembourg City, a medieval city famed for its sheer cliffs. A full marathon and a mini marathon (4.2k) are also offered as well.

Connecting the Vatican City to Rome, the Rome Half Marathon Via Pacis is a course not to miss. Runners will follow a loop that starts and finishes in front of the Piazza San Pietro and crosses over the River Tiber in the heart of Rome. This late September race is an incredible way to see the sights of Vatican City.

Located in the Mediterranean Sea between Sicily and the North African coast, the nation of Malta has history dating back to 4000 B.C. Runners of the Zurrieq Half Marathon will travel on a lollipop-shaped course with plenty of rolling hills. Make this late November race a destination getaway full of sunny island time packed with plenty of history.

The Republic of Cyprus is the third largest and third most populous island in the Mediterranean, and this race is mostly flat and fast, with three out-and-back sections so you can keep an eye on your competition. Runners of this mid-March race will enjoy six fluid stations, pacers for 1:45 and 2:00, and a free bus pass to enjoy the city over the weekend.

In the capital city of Prishtina, Kosovo hosts a half marathon each April. Runners follow a loop course that begins in the city center and follows a paved route that is mostly flat. At 4,212 square miles, Kosovo is smaller than the state of Connecticut and shares borders with Albania, Macedonia, Montenegro, and Serbia.

In late October, the capital city Podgorica hosts the Podgorica race series featuring a 5k, 10k, half marathon, and full marathon. Runners begin the half marathon race in Danilovgrad and finish the race in Podgorica, covering 13.1 miles on a point-to-point route. Held every year since 1994, this race has become a popular tradition in the tiny country of Montenegro.

Go race on the roads of the Grand Prix! The half marathon distance is unfortunately no longer offered, but the country of Monaco does allow runners to take to the streets for a 5K and a 10K in mid-February. The 5K is an out-and-back near the shoreline of the tiny country while the 10K offers runners a mixtures of trails and asphalt.

Known for its mountains, ski resorts, and lakes, the country of Slovenia is smaller than Vermont. Ljubljana, the capital and largest city of Slovenia, hosts a half marathon in late October. The flat and fast course is the perfect place for a PR race and allows participants not only to see the beautiful green spaces, but a mix of the sights of the old town and new town.

Previous post: How I Set My 2019 Running Goals & How You Can Too