10 Races Every Runner Should Love 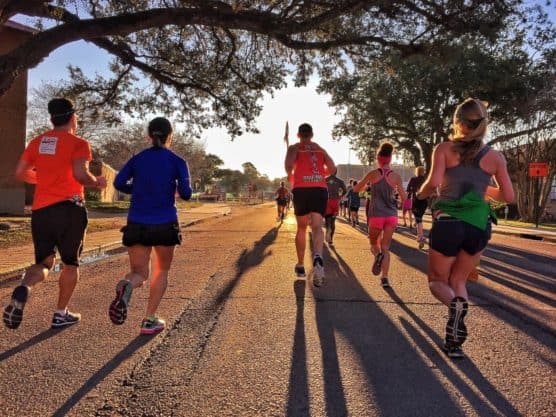 Races happen every weekend across the United States so it is impossible to pick a top 10 list. However, it is rather easy to name 10 races that every runner should love.

Run since 1897, this marathon continues to be the benchmark in the marathoning world. Though a percentage of runners participate through fundraising, most of the field is comprised of those able to run a qualifying time.

Additionally, it attracts some of the fastest marathoners worldwide with a large cash prize and competitive field.

Over 50,000 runners fill the streets of New York City each November to make the journey through 5 boroughs. This race attracts not only a huge competitive field, but it also hosts thousands of international participants.

Spectators line the streets from nearly start to finish and runners often say it is one of the best supported races in the world.

Originally a horse trail ride, the Western States Endurance Run is the world’s oldest 100 mile trail race. Established in 1977, the race began a lottery system in 1981 and the limited trail space has made this race more difficult to enter with each passing year.

With over 18,000 feet of elevation gain, snow, and temperatures above 100°F, seasoned runners travel from Squaw Valley to Auburn, California each year to test the limits of their endurance each June.

As the world’s largest 10K, the Peachtree Road Race in Atlanta has been hosting professional and amateur runners every July 4th since 1970.

Some 60,000 participants take part in this tradition each year and the sidewalks are just as packed as the streets.

There are so many runners that starting corrals are spread out over an hour and a half — three times as long as what the elites can finish the 6.2 miles in.

Held in Davenport, Iowa at the end of July, the Bix 7 Road Race is one of the largest non-marathon events in the midwest.

Elite runners participate in this unique distance year after year and legends Bill Rodgers and Joan Benoit Samuelson are regular entrants. Amateurs often participate in costume and make this unique race a fun event for the entire family.

Runners come from all over to participate in this 10 mile race each year in May in Philadelphia. The world’s largest 10 mile race hosts a bevy of runners looking to set a PR on a flat and fast course.

In 1980, 1576 runners finished a today, a lottery systems handles the nearly 40,000 entrants as the race exploded with popularity.

The fastest road 5K times in the world have been set at the Carlsbad 5000 in Carlsbad, California. Over 10,000 runners participate in one of the multiple divisions offered, including elite, amateur, and masters.

From 7:00 a.m. until noon, runners in different divisions take to the streets to have their chance at setting a new best at the world’s fastest 5K.

While longer distance races have increasingly become more popular over time, the mile has slowly become relegated to school-aged athletes and professionals.

However, the Fifth Avenue Mile is a chance for regular runners to test their speed in the mile distance as well as watch some of the best in the sport vie for first.

Multiple heats makes it fairly easy for all runners to not only run their own race, but spectate others as well down one of the most well known streets in New York City.

Held in January each year, the 13.1 distance of the Disney race weekend is easily one of the most popular races in the world. Combine one of the favorite distances with the beloved theme park and it is easy to see why runners love this race.

While many participants are happy to take their time along the course, stopping for character photos and enjoying the camaraderie of other participants, many top runners come out for the fast and flat course.

Every year in May, thousands of runners pour into Spokane, Washington to race 12K (7.46 miles) at the Lilac Bloomsday Run. Prize money is not only offered to top finishers, but to top US finishers and top Washington State finishers as well.

Beloved by local runners, 88 people (nicknamed “Perennials”) have completed the race every year through 2017.

Previous post: 7 Tips For Taking Your Running to the Next Level