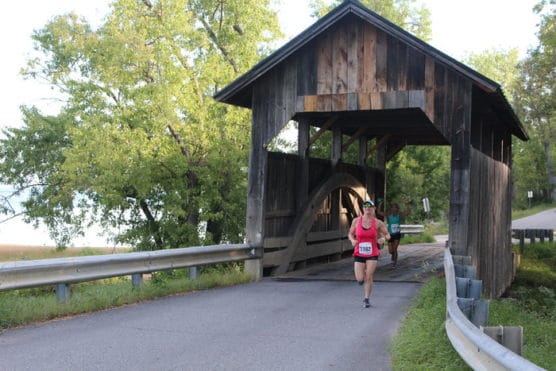 “He didn’t run from something or to something. not for anyone or in spite of anyone; he ran because it was what his body wished to do. The restiveness, the self-consciousness, and the need to oppose disappeared. All he felt was peace.” — Laura Hillenbrand on Louie Zamperini, “Unbroken”

The course for this race — which rises no more than 100 feet in elevation throughout — features views of some of the most quaint, picturesque parts of New England, taking runners through several covered bridges, most of which date to the pre-Civil War era.

Surrounded by the rolling green Adirondack Mountains and the deep blue waters of Lake Champlain, the small Vermont town of Shelburne, population just over 7,000, plays host in mid-September to this half, which takes runners on an out-and-back race that starts and finishes at Shelburne Beach.

Nestled in the heart of Pennsylvania Dutch country, this area lives up to its billing — with everything from covered bridges and horse-drawn carriages along scenic, winding roads to the markets and galleries along Lancaster’s historic streets.

If you get a kick out of running bridges, you’ll love Frankenmuth’s Brückeläufe — the name is German for “Bridge Race” — which features 13 bridges throughout its 13.1 miles, a couple of which are covered bridges and others that date back to the turn of the 20th century.

Run in a small town about an hour north of Indianapolis, this race’s highlight is the stretch through the Adams Mill Covered Bridge, whose history here in Indiana’s Carroll County dates back to the early 1870s.

Set for its inaugural running this fall along the rolling country highways of this tiny hamlet in the Catskill Mountains of New York, this race offers runners the chance to run through beautiful scenery along an almost all-downhill race.

You’ll run through four covered bridges in Vermont’s Northeast Kingdom at this race which starts in Lyndonville, a small town of just over 1,200 in the state’s northeast corner, and finishes 13.1 miles later in St. Johnsbury.

8) Roaring Run Half Marathon • Scio, OR

Runners make their way through northwest Oregon’s Roaring River valley, along a route filled with views of the mountains all around as well as the river that gives the race its name, and finish their 13.1 miles by running through the historic Larwood Covered Bridge.

A few thousand runners flock to the Lehigh Valley here in eastern Pennsylvania for the annual springtime running of this race, which is filled with gently rolling hills and the scennic natural beauty of the city’s Lehigh River Parkway.

You’ll run through four of Vermont’s famed rural covered bridges at this 25-year-old race, which starts at the Suicide Six Ski Area in nearby South Pomfret and rolls through open farmland along the Ottauquechee River. Be ready when registration opens – it sells out every year in less than an hour.

Next post: 13 Ireland Half Marathons for the Traveling Runner

Previous post: How to Maintain a Positive Running Mindset