13 Half Marathons in Baseball & Football Stadiums 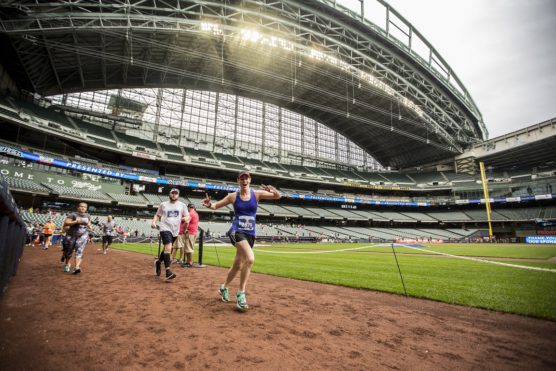 I’ve never been an actor on Broadway, but it feels like you’re on a stage when you play at Yankee Stadium. And that’s the feeling I’ve always had. — Derek Jeter

1) The Giant Race Half Marathon

If you’re a baseball fan, this is probably the half marathon race that’s tailored exactly for you, as runners finish the race by crossing home plate inside San Francisco’s gorgeous AT&T Park, the home of Major League Baseball’s San Francisco Giants.

You’ll have the chance to run all the way around the Milwakee Brewers’ Miller Park at this late summer race, which unfolds first on streets surrounding the ballpark before finishing with a stretch that starts on the third-base side and runs all the way around home plate to the first-base side before exiting the park for the race finish.

Run by the same athletic organization that stages the fabled Boston Marathon each April, this race shows off Boston’s series of linear parks (known as the “Emerald Necklace”) and takes runners across the finish line in Franklin Park’s White Stadium.

The campus and surrounding neighborhoods around Murfreesboro’s Middle Tennessee State University serve as the backdrop for this early fall race, which finishes on the running track of the university’s Dean Hayes Track & Soccer Stadium.

Hailed by organizers as North Carolina’s “most welcoming half marathon” thanks to its small-town feel and intimate race size — just shy of 100 runners crossed the finish line last year — this race finishes on the first-base line inside Grainger Stadium, the home of the Down East Wood Ducks of minor league baseball’s Class A Carolina League.

Starting from Trenton’s Waterfront Park, the home of the Trenton Thunder minor league baseball team, this race features a finish line that will be one to remember, organizers say, as runners will enter the park where the Thunder play and run around the edges of the diamond before they cross home plate to finish the race.

Runners start (and finish) this early spring race near Montgomery’s Riverfront Park, which overlooks the winding Alabama River. After making your way through the city, you’ll cross the finish line inside this 7,000-seat stadium where the Montgomery Biscuits, the Class AA affiliate of the Tampa Bay Rays, play.

Starting just across from the park where the 1982 Knoxville World’s Fair was held, this race takes runners all through the city before bringing them across the finish line at the 50-yard line inside Neyland Stadium, the home of the University of Tennessee Volunteers football team.

Part of a weekend-long outdoor event in Fresno called the California Classic Weekend, this race takes runners through the city’s zoo before bringing them inside its baseball stadium — where runners will be able to see themselves on the huge diamond vision screen as they cross the finish line.

Starting from Assembly Hall on the University of Illinois campus, this race follows a winding loop through the city, all the way in toward the finish line on the 50-yard line at the University’s Memorial Stadium, the home of the “Fighting Illini.”

Legendary as the home of the “most exciting two minutes in sports,” this capital of thoroughbred horse racing starts and finishes downtown near Louisville Slugger Park, and features a loop along the infield of Churchill Downs, the hallowed home of the Kentucky Derby itself.

Featuring a starting and finish line on the campus of Moline’s Augustana College, this USATF-certified race finishes on the stadium track at the track and field complex at Augustana Stadium.

Green Bay Packers fans will love this race, as the finish line takes you inside the NFL team’s Lambeau Field for a run around the gridiron, after a run through mostly residential streets and city parks for most of the route.

Next post: 5 Tips to Stay in Shape For Running Year-Round

Previous post: 4 Things You Can Do When You Hit ‘The Wall’