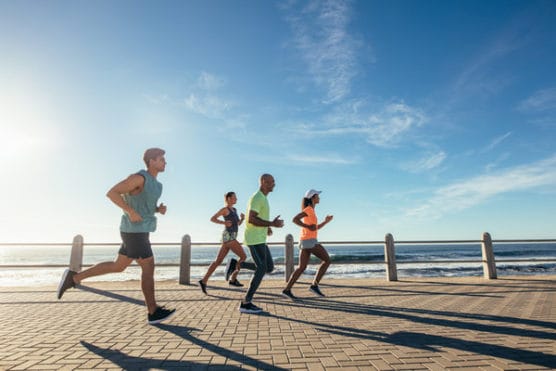 “The trail is the thing, not the end of the trail. Travel too fast and you miss all you are traveling for.” — Louis L’Amour

There are few race weekends as magical as this one, whose half marathon runs on Saturday (followed by the full marathon on Sunday) and features stretches through Epcot and the Magic Kingdom, as well as past Cinderella’s castle and the Tomorrowland Speedway.

Runners will get to see many of the local landmarks and sights that give Charleston its southern beauty and charming style along the race route, which follows a point-to-point course that starts in downtown Charleston near the area known as “south of Broad.”

One of three races that make up Southern California’s Half Marathon Triple Crown (including April’s La Jolla Half Marathon and the America’s Finest City Half Marathon in August), this race offers a course whose signature is its sun and surf, with waves crashing alongside the shore for runners for much of the route.

Fast, very flat and scenic throughout, this race takes runners mostly around the edge of the easternmost island in the Florida Keys, known for its wildly colorful sights and sounds as well as its stunning sunsets.

Run through the area known to locals as the “Olde Naples” section of town, this event takes runners through the city streets, residential neighborhoods and waterfront districts of this city near the state’s southern tip and just a short drive from Everglades National Park.

As its name suggests, this race gives runners the chance to run along the oceanside highways of the windswept western coast of Maui, one of Hawaii’s most popular travel and beach resort destinations.

Plentiful sunshine, beaches, island parks and some of the world’s most gorgeous sunsets are what travelers come from across the country to visit St. Petersburg for on Florida’s Gulf coast, and they’ll get to see plenty of all of those at this race.

Run through the heart of the Texas state capital at this mostly downhill race, which takes runners past local sights like the Austin Arboretum and the Stack Valley Greenbelt before finishing in front of its iconic capitol building.

Described by past participants as a beautiful course with plenty of fresh air and rolling hills, the race takes runners along a loop course through the 13,000-acre resort’s neatly manicured gardens, bicycle trails and woodlands.

From its gleaming condominiums and towers that look over the waves of the Atlantic Ocean along the shoreline, Miami is no doubt one of the nation’s most colorful, cosmopolitan and unique cities, and all its charms are on display along the course at this race.

Nestled just off the coast of Savannah near Wilmington Island and the mouth of the Savannah River along the border between Georgia and South Carolina, Tybee Island still has much of its wild, untamed natural beauty, scenery that runners will get to take in at this race.

12) Save the Light Half Marathon

Run along the city streets of this beach town just outside Charleston, this race takes a few hundred runners and walkers each year along a seaside tour of gorgeous beach homes, oceanfront vistas and more.

If you’ve ever traveled to San Francisco and driven through or just walked past the gorgeous landscape that is Golden Gate Park, then you know why Runner’s World magazine ranked this as one of the country’s most scenic half marathon races.

Twenty bands spread throughout 13.1 miles, all playing music to pump up runners throughout this city on Florida’s Gulf Coast, from rock bands to high-school marching bands and everything in between.

Often mentioned as one of the nation’s best all-around road races, this event follows a long, scenic out-and-back course along the Pacific Coast Highway, and includes stretches past the famed Huntington Beach pier and the Bolsa Chica Wetlands.

Featuring a course that’s quite unlike any other in the world, the Daytona Beach Half Marathon takes runners on a 13.1-mile course from the world center of racing to one of the world’s most famous beaches and back.

Featuring two and a half miles of running along the sands of Jacksonville’s beaches and an opportunity to support one of the running world’s most significant charitable fundraising efforts, which also goes by the title “the National Marathon to Finish Breast Cancer.”

More than 10,000 runners and wheelchair participants trek the streets of what is probably the country’s most culturally, architecturally and musically interesting city at this race, which runs in the days after Mardi Gras, the annual pre-Lent party to end all parties.

A beautifully scenic and very challenging race that has won raves from publications like Runner’s World magazine, this race offers a rugged desert course and what is usually a smaller field than bigger-city races.

This race takes runners through many of the tree-lined and sun-splashed resort’s most scenic and famed attractions, including the Magic Kingdom — and its Fantasyland, Tomorrowland and Adventureland — the green fairways of the Walt Disney World Golf Complex.

21) Marathon of the Treasure Coast

Run just a short drive from nearby Port St. Lucie, this race takes runners through this stretch of the “Treasure Coast,” named for the ships carrying treasure that ran aground here in the 17th century thanks to the plentiful coral reefs just off the coast.

A mostly fast and very flat — and highly scenic — run through the streets of Miami and Miami Beach await at this race, which offers ample views of the ocean waves crashing against the shore and the art and architecture of the city’s world-famous South Beach.

23) Running the Shoals Half Marathon

Run the golf cart paths that wind along the tee boxes, fairways and greens of The Shoals, a 36-hole golf course tucked in Alabama’s northwest corner just outside Muscle Shoals, Ala., a city of nearly 15,000 people that’s probably most famous for its music.

The long, wide white-sand beaches of Florida’s Fort De Soto Park, located just a few miles southwest of St. Petersburg, are the setting for this race, which usually draws more than a thousand runners each year.

Run just as winter is giving way to spring in Southern California, this race takes runners on a tour of this beach city perched atop the dunes overlooking the Pacific Ocean near San Diego, along a course that runs through Encinitas and the nearby towns of Cardiff and Solana Beach.