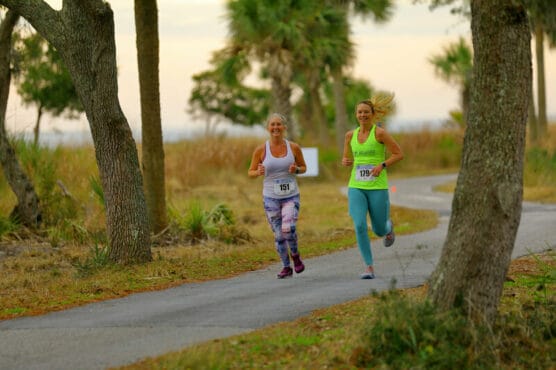 “Why do they not teach you that time is a finger snap and an eye blink, and that you should not allow a moment to pass you by without taking joyous, ecstatic note of it, not wasting a single moment of its swift, breakneck circuit?” — Pat Conroy

1) Save the Light Half Marathon

A run to — quite literally — save the Morris Island Lighthouse just off the Folly Beach Pier here on this small beach near Charleston, S.C. The race began several years ago as an effort to raise money to preserve the lighthouse, which is surrounded by water on all sides thanks to erosion, from being lost to the sea. You’ll start and finish the race at the pier, and run the route entirely on city streets with views of the ocean just over your shoulder.

Fast and largely flat, this scenic race course takes runners and walkers from the starting line at the island’s Jarvis Creek Park along a course that’s made up mostly of paved roads and a few bike trails. With a full marathon, half marathon and 5K, this race takes place at what will likely be a perfect time of the year weather-wise to run, as cooler temperatures combine with the winds coming in off the coast.

3) The Dirt Dash Half Marathon

Nestled among the lush pine forests and swamps and marshes filled with wildlife inside Johns Island County Park, which lies just to the southwest of Charleston along the South Carolina coast, the trails here play host to this annual post-Thanksgiving run, which features an (extremely!) generous 7-hour time limit. “This event will happen rain or shine,” the organizers say. “With the exception of tropical storm, hurricane conditions, wildfires, earthquakes and zombies walking the course.”

Located about a half-hour’s drive from downtown Charleston, this race runs through Johns Island County Park, a 738-acre wooded oasis filled with miles of trails shaded by moss-draped trees. You’ll get to run on dirt trails that wind throughout the park, with everything from grass to tree roots along those often uneven trails. Kids as young as 10 years old are welcome to participate, too, as long as they have a parent or guardian to run with them. Due to Covid-related restrictions, no spectators will be allowed on the course.

Five miles of this early fall race unfold along the oceanfront at Myrtle Beach, the crown jewel of the 60-mile-long stretch of coastline known as South Carolina’s “Grand Strand.” Those miles all come in the second half of this fast and very flat race, after you’ve run down Ocean Avenue along the beach and past the Broadway at the Beach amusement park. The home stretch of the race brings you along the boardwalk before crossing the finish line at Plyler Park, near the SkyWheel.

Just as a quick aside, I grew up in Augusta, Ga., which lies just across the Savannah River from North Augusta, and so I know this area very well. It’s likely to be chilly this time of year and not as pretty as it normally is — the trees will likely be bare by this point in the year — but this run will be a lot of fun, as the course winds along long stretches of the North Augusta Greenway, along the Savannah River. And you’ll cross the finish line at home plate inside the brand-new SRP Park, the newly-built stadium for the Augusta GreenJackets minor league baseball team.

7) The Kiawah Island Half Marathon

Fast, nearly all flat paved roads along tree-lined roads that wind through golf course communities and along the beaches of this resort island, located about 25 miles southwest of Charleston. From the starting line near Kiawah’s East Beach, the out-and-back route takes runners through a combination of oceanside forests, marshlands and leisurely resort roadways, with plenty of scenic views of the island’s majestic beachfront homes, waterways and more.

If you’ve ever visited, you’ll recognize Charleston as one of the nation’s truly unique cities, as it meshes the southern charm and ambiance of places like New Orleans with many of the architectural accents and styles of cities in New England. The half marathon at this wintertime race follows a point-to-point course that starts downtown near the area known as “south of Broad,” and runs through the city as well as the North Charleston area before heading in to the finish line at Riverfront Park.

A magical run on the island pictured above, accessible only by ferry and whose isolation from the mainland helped preserve its Gullah culture and language for more than a century. Most of the island remains undeveloped today, and you’ll get to see much of it along a combination of paved and unpaved road that snake along the coastline and into the island’s interior. You’ll have your choice of running 13.1, 26.2 or 39.3 miles — the half marathon runs the loop route once, the full marathon twice and the ultra three times — but this isn’t a race to run to record a fast time. You want to soak in the feel, the sights and the sounds of it all.

Tagged as: South Carolina Half Marathons