More than 2,500 runners and walkers crossed the finish line in both races combined at the 2016 running of Florida’s Key West Half Marathon and 5K, which takes runners on a course to see the wildly colorful sights and sounds of this island at the far western end of the Florida Keys.

Fast, very flat and scenic throughout, the course for the race takes participants mostly around the edge of this, the easternmost island in the Florida Keys, and includes a bridge crossing over Key West’s Cow Key Channel to Stock Island and back, for a run around the Key West Golf Course and Country Club.

There’s also a stretch of the race that unfolds through CB Harvey Rest Beach Park near the White Pier, where you can get spectacular views of the sunset later in the day.

The out-and-back 13.1-mile course for the race starts and finishes at Dante’s Restaurant on Caroline Street, on Key West’s western end. From there, the course winds its way along several twists and turns through the city streets, turning on Duval Street, Eaton Street and Whitehead Street before hitting longer straightaways along Atlantic Boulevard and South Roosevelt Boulevard, which is also part of Florida Highway A1A.

Along the race route, runners have views of the ocean waters for virtually the entire course, and pass by local landmarks like the Key West lighthouse, famed author Ernest Hemingway’s house, downtown Key West’s “old town” area and the southernmost point in the United States.

The biggest elevation change during the 13.1-mile route are the stretches along Duval Street and Whitehead Street. Runners head over this hilly stretch twice — once going over and once coming back — and then head along Key West’s southern edge for the second half of the race heading back toward the finish line.

Even though the race takes place in January, it still typically sees relatively warm weather, so runners from climates where it’s generally colder during the season are encourage to stay well hydrated throughout the race, as aid stations will be available every couple of miles, with water and Powerade. 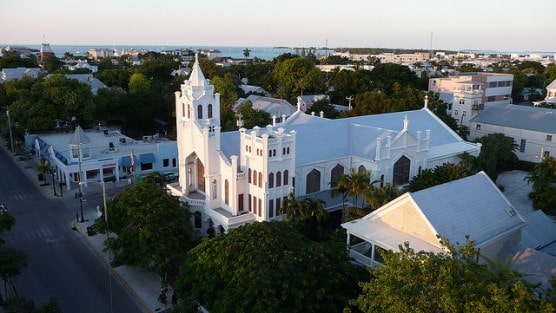 Set along the end of the Florida Keys at the southernmost tip of the United States, Key West enjoys mild to moderately warm weather conditions in the winter, with relatively low rainfall compared to the summer season.

In January, temperatures averages between 65°F and 75°F, while rainfall totals average just over 2.2 inches for the month. On the day of the race (Jan. 14), the average low is 65°F and the average high is 75°F.

To reserve your spot in the winter 2024 running of the Key West Half Marathon or 5K race, register online at RunSignUp.com by clicking here.

Ever run in the Key West Half Marathon? Share your impressions here, or post your review in the Comments box below.