How To Get Through the Middle Miles of a Half Marathon 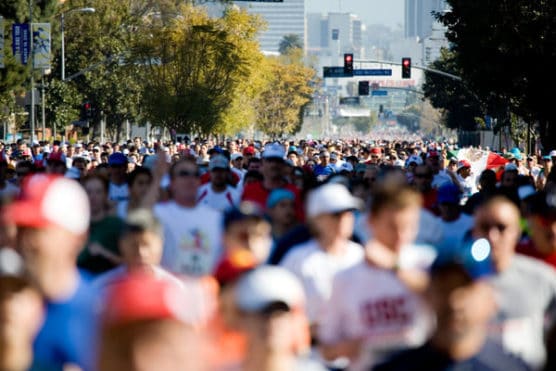 The middle miles in a half marathon can be the hardest miles of the race. The beginning of the race excitement has worn off, and you aren’t close enough to the finish line for the “almost done” excitement.

For me, miles 7 through 10 of a half marathon typically make or break the race. Normally they are the hardest both physically and mentally.


For instance, earlier in the month I ran the Shamrock half marathon in Virginia Beach. It’s my sixth time running that race and the last two years I’ve run the exact same time of 1:26.50.

In 2016 of the Shamrock Half Marathon, miles 7 through 10 broke me. I went from running at my goal pace to running a minute above my pace. Part of that had to do with taking the race out too quickly, but it also had to do slipping into a negative mindset and never recovering.

In 2017, I felt confident during miles 7-10, and I found myself getting faster at each mile. Even though the weather was not ideal, I mentally stayed confident and found myself having a much more positive experience.

Despite the times being exactly the same, the races themselves were drastically different. I finished both races in an entirely different mindset. I attribute that change to staying confident during those mentally tough middle miles.

So how do you stay confident?

Break the race up into sections. Instead of thinking “I’m going to run 13.1 miles” divide the race into blocks. Personally, I have found that dividing the race into four 5Ks and then a bonus round is much easier to digest. Changing your frame of thought can help the race go by much faster.

Count the miles you have run. When you are in the middle of a race don’t count down (X number of miles left), count how far you have come! It’s much easier to think: “I’ve already come 8 miles,” versus I have 5 more to go.

Think about getting to a particular section of the course. Do you know friends at mile 8? Maybe you know a scenic area at mile 9.

Or maybe just think about the next water stop! Even just looking at a building and focusing on that can make the miles go by faster. During the Philadelphia half, I focused on beautiful parts of the city and let my mind wonder instead of counting down the miles.

Pump yourself up at water stops. Personally, the excitement from the volunteers and spectators motivate me. Thank the volunteers for water and
high five people around. This is one of my favorite things to get myself pumped up.

Feed off other racers. This can be one of the toughest things to gauge but look at other runners. Sometimes they want someone to chat with as much as you do. While personally, I’m a talkative racer, I respect other runners might not.

If you sense someone else might be into chatting, it could help distract you. Look and see how they feel. Sometimes it is more motivating to see everyone is dealing with the same course, weather and situation. Use it to your advantage.

Racing a half marathon can be tough but making it to the finish line can be one of the most rewarding aspects of running. Remember, if it were easy, everyone would do it!