Set for its annual springtime running here along the Deschutes River, a place where salmon and steelhead make their annual migration upstream, the Salmon Run Half Marathon celebrates the “homecoming” of several hundred runners who take to the streets of this city every year, overcoming obstacles of their own to run this beautiful route.

The race takes place just east of the Cascade Mountains, whose lakes and mountain peaks are a favorite for skiing in winter and hiking in the summer, while the nearby volcanic peaks like Pilot Butte offer stunning vistas of Oregon’s High Desert terrain for miles around.

While the first half of the course is net downhill and the second half is net uphill, much of the course will feel flat, with a peak of 3,226 feet during the last mile, from the course low of 3,080 feet near mile 7.

You’ll get to take in gorgeous scenery like the North Unit Main Canal for several miles of the race, and you’ll run on dirt riverside trails framed by wooden fences and greenery.

Thanks to its April running, the race is considered one of the best to kick off your running year here in the Pacific Northwest, and an excellent event for base-building for races later in the year. 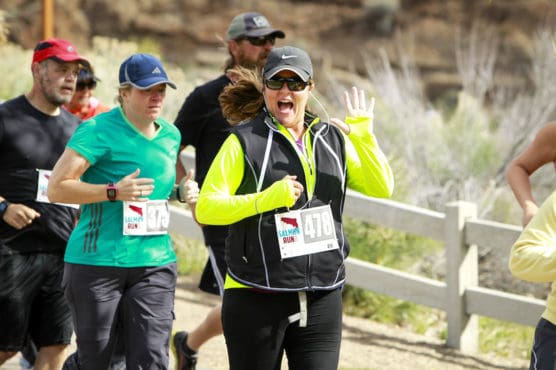 Runners make their way along the course at last year’s Salmon Run Half Marathon in Bend, Oregon. (Courtesy Lay It Out Events)

Nestled along the Deschutes River in central Oregon, roughly 160 miles from Portland, Bend typically sees plenty of cool weather in April, with temperatures that average between the low 30s and the upper 50s, and snow is still very much possible, as the city sees an average of 2 inches during the month.

See the race route map for the Salmon Run Half Marathon here.

To reserve your spot in the 2023  running of Bend’s Salmon Run Half Marathon, 10K or 5K race, register online at the official website below.

Ever run in the Salmon Run Half Marathon? Share your impressions here, as well as anything you learned about the race that you think other runners/walkers should know.