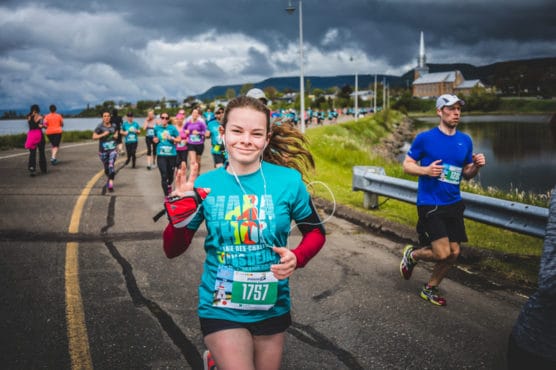 Runners in the half marathon will follow a completely different route from those running the full marathon at this race, which bills itself as “stunning running” thanks to the gorgeous city backdrop we all got to know during the Winter Olympics nearly a decade ago. There’s a downhill in the first couple of kilometers, followed by mostly flat terrain from then on, as you run through Vancouver’s Yaletown, Chinatown and West End neighborhoods, with a loop around Stanley Park and the waters of English Bay.

Nestled along the shoreline of Lake Ontario just west of Toronto, this young city — it was founded in the early 1970s — boasts more than 400 miles of suburban trails, some of which you’ll run on the half marathon route. You’ll start the race at Mississauga’s Celebration Square, and features stretches through its Saddington Park and along the waterfront of the lake.

Described by one of our subscribers who lives in Montreal as “an amazing race weekend,” this race unfolds along a mostly fast, flat route through the streets of Canada’s capital city. You’ll make a pair of bridge crossings over the Ottawa River in the second half of the race, and spend the first few kilometers running along the Rideau Canal. Around its half-way point, the race brings you past Parliament Hill — Canada’s equivalent of America’s Capitol Hill.

Set for the same weekend as its counterpart race in Ottawa, this half marathon — officially titled the Centaur Subaru 21.1K — is part of a running event that marks its 55th anniversary this year, with a route that takes runners along the scenic Bow River that cuts through the city. You’ll also run through stretches of its downtown and a couple of city parks, including a start and finish in Calgary’s jewel, Stampede Park.

5) Edge to Edge Half Marathon

Run entirely on the Ucluelet Peninsula of Vancouver Island in the Canadian province of British Columbia, this race unfolds along the Wild Pacific Trail, a 9-kilometer trail network described as a place that “weaves itself into your soul” thanks to stunning views of rainforest on the trail as well as reefs, shipwrecks and whales out in the Pacific Ocean.

You’ll get to see one of the true natural wonders of the world at this autumn race, which unfolds almost entirely along the riverfront on the Niagara Parkway, which parallels the Niagara River. The out-and-back race starts and finishes near the overlook of the iconic Horseshoe Falls, and you’ll be able to see America across the river for nearly the entire way around the course.

Canada’s biggest city (by population) hosts its flagship fall marathon through the streets of its downtown, starting and finishing next to its city hall, whose pair of tall curved buildings make it one of the city’s most distinctive landmarks. The half marathon spends several kilometers along the waterfront of Humber Bay, and you’ll also run past the base of its famous CN Tower.

Help me add to this list! Post a race you think should be here in the comments below.

Previous post: What Not to Do When You’re Running