10 Half Marathons That Run Across Borders 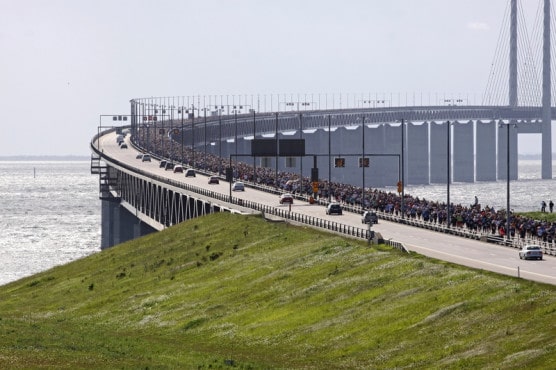 Runners make their way between Denmark and Sweden at an annual bridge race there in June 2010. (© Kim Carlson | Dreamstime.com)

1) Flying Pig Half Marathon • Ohio/Kentucky • May

The Flying Pig Half Marathon begins Cincinnati, Ohio and crosses the Ohio River into Kentucky around the first mile marker. Runners head west for a couple of miles and cross back over into Ohio after mile marker 3. The rest of the race loops through downtown Cincinnati on the Ohio side and finishes along the river. Put this well-organized and well-attended (by runners and spectators) half on your must-do list.

2) Run For The Border Half Marathon • New Hampshire/Massachusetts • March

Starting in Rye, New Hampshire and finishing in Salisbury, Massachusetts, the point-to-point Run For The Border Half Marathon is a great way to cross two states off your list with one race. The race begins at 11:00 AM — perfect for runners who prefer a little extra time to sleep in on the weekends. It is run in conjunction with a 20-mile race which draws plenty of fast runners looking to get one last long run in before the Boston Marathon.

The Tri States Half actually takes place in just two states, Arizona and Nevada (full marathoners will run in all 3 states). The half is a point-to-point course that begins in Arizona and finishes in the town of Mesquite, Nevada. The course is mostly downhill, but there are some hills as runners approach the Nevada border. Racers will enjoy new desert scenery with each mile as they travel some of the most beautiful sections of the Virgin River Valley.

4) Bristol Half & Half • Virginia/Tennessee • April

The Bristol Half & Half is a point-to-point course that begins in Virginia and finishes in Tennessee. It is a rolling hills course that winds through the town of Bristol which hugs the Virginia/Tennessee border. It is very spectator friendly as runners make a few large loops within a few square miles.

The loop course of the Quad Cities Half Marathon begins in Illinois, travels to Iowa, and finishes back in Illinois. Runners begin in Moline and begin crossing the Mississippi River by the first mile marker. They make a loop in Bettendorf and travel along the river to Davenport.

Just after mile 9, racers cross the river onto Arsenal Island and run the final miles before crossing the finish line back in Moline. Fun fact: this Midwest race draws elites with great cash prizes and plenty of bonuses for fast times.

The loop course of the Whispering Woods & Twigs Half Marathon actually traverses pavement mostly in Mississippi. However, there are nearly 3 miles of the course that are run on Stateline Road, the demarcation between Tennessee and Mississippi.

Runners begin at the Whispering Woods Hotel & Conference Center and travel the easternmost portion of Olive Branch, Mississippi. A generous 20-minute-per-mile time limit makes this race enticing for runners of all abilities.

Runners will hop through Texas and Arkansas a few times throughout the Run The Line Half Marathon in Texarkana. After a shotgun start in Texas, runners make their way towards Arkansas within the first mile. The loop course takes runners along the Nix Creek Trail, the Phillip McDougal Trail, and along State Line Road. Racers will hover in between the two states on the final mile before heading back to Texas for the finish line.

Forget running through two states in a race, how about running through two countries? The Detroit Chevy Dealers International Half Marathon — which is run in conjunction with a full marathon — is a course that sends runners into Canada and back. Runners cross the Ambassador Bridge just after the 3rd mile mark and run into Windsor, Canada for a few miles.

Shortly after mile marker 7, racers will head through the Windsor Tunnel to make their way back to the United States. Though it might be obvious crossing country borders, running this international race does require proper documentation.

This year (2015) will be the inaugural year for the Bay Of Fundy Half Marathon. Though exact logistics of the half course have yet to be solidified, there will be 2 border crossings and runners will partially join the full marathon course. The full marathon that is run in conjunction is an out-and-back course that crosses into Canada’s Campobello Island after the 5th mile. Register now to be a part of this first-time event.

Though mostly in New Jersey, the course of the Trenton Half Marathon does offer a couple of miles in nearby Pennsylvania. Runners make a 4-mile loop on the New Jersey side before crossing the Delaware River into Pennsylvania. The course follows along Williamson Park and racers cross back over the river along Calhoun State Bridge at the halfway point.

After a loop in Cadwalader Park, runners head for the finish at the Mercer County Waterfront Park, home of the Trenton Thunder minor league baseball team.

Previous post: 15 New York City Half Marathons You Can Run in 2015