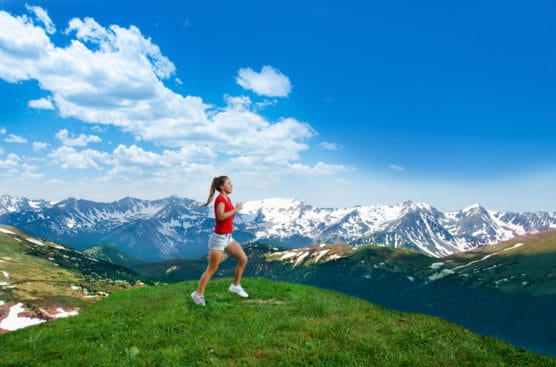 “If you run, you are a runner. It doesn’t matter how fast or how far. It doesn’t matter if today is your first day or if you’ve been running for twenty years. There is no test to pass, no license to earn, no membership card to get. You just run.” — John Bingham


1) Run Through Time Half Marathon

A scenic, challenging run along the historic and spectacularly scenic Ute Trail in Colorado’s Arkansas Valley, which in mid-March can be completely dry with sunny skies — or covered in snow two to three feet deep. You’ll have six hours to complete this course, which runs on a combination of single-track trails and jeep roads, climbing some 2,000 feet between the start and the finish line, at elevations between about 7,000 and 7,800 feet above sea level. Of course, with all that climbing uphill comes some incredible rewards, including views of Salida and the valley below.

A stunningly beautiful run through the high desert country of western Colorado, along parts of the 142-mile-long Kokopelli Trail, a mecca for backpackers and mountain bikers that stretches between Fruita and Moab, Utah. You’ll run at elevations between about 4,000 and 5,400 feet above sea level during the half marathon, which starts near the northern edge of the McInnis Canyons National Conservation Area, and from there heads up onto the Kokopelli, offering up panoramic views of canyons and mesas as well as the winding Colorado River below.

Filled with stunningly beautiful views of the high desert country of Colorado along its famed 18 Road Trails, this 13.2-mile race features “short steep climbs and descents [with] beautiful views of the nearby buttes and mesas,” organizers say. You’ll definitely want to be ready for a rugged run through the backcountry at this event, so bring along your hydration pack, sunglasses and sunscreen.

4) Mine Shaft Half Marathon

Its organizers say it’s the most challenging half marathon you can run anywhere in Colorado’s Front Range Mountains, along a beast of a route that climbs more than 2,900 feet over the course of 13.1 miles. “Enjoy the aggressive elevation gain, we promise you won’t feel shafted,” they explain, as you run through waist-high grassy meadows, along rocky downhill dirt trails and gravel paths that look out onto gorgeous views of the valley below. “This race will make you laugh, and possibly cry,” they note, adding: “You will be left with joy, pride, and confidence in your running soul.”

One of the most stunningly scenic road races anywhere in America, this race unfolds on a loop route through Garden of the Gods Park, known for the sweeping views of its 300-ft.-high sandstone rock formations and the sight of Pikes Peak off in the distance. The race is run mainly on paved roads inside the park and you’ll need to be ready for high altitudes — the race is run between about 6,200 and 6,500 feet above sea level. The highlight of the race is Balanced Rock, which appears to defy the law of gravity at it sits perched precariously atop a sloped ledge of sandstone, just before the halfway point in the race.

A beautifully scenic run along the bike paths that wind through Colorado’s Glenwood Canyon. Carved over millions of years by the Colorado River, the canyon stretches about 16 miles through the Rocky Mountains, and runners can expect to see sheer cliffs on both sides of the course as well as smaller canyons and creeks. From the starting line, the course winds through the rocky-faced canyon walls, which in some spots stand as high as 1,000 feet above the trail. Though it’s often windy on race day, that doesn’t take away from the beauty of the route, which has been called one of the most scenic stretches of the Interstate Highway system anywhere in the country.

A run across one of the highest suspension bridges in America, the Royal Gorge Bridge, which stretches more than 1,200 feet from end to end, nearly 1,000 feet in the air over the Arkansas River. (From the time it was built in 1929, the Royal Gorge was the highest suspension bridge in the world until a bridge built in China in 2001 surpassed it.) You’ll start on the eastern end of the bridge and run across to the other side, where you’ll run all the way to Copper Gulch and back. Also, you’ll need to be ready for a high-altitude run; nearby Cañon City lies at just over 5,300 feet above sea level.

The foothills of the Colorado Front Range Mountains are the backdrop along the course at this race, which takes runners on a mostly off-road course through the countryside just north of the city, along mostly dirt roads and quiet rural lanes. You’ll take in views of farms, cottonwood groves and several ponds along the out-and-back course, which starts and finishes near Boulder Reservoir Park. From there, the race has a long, steady climb all the way to the half-way point; after that, it’s mostly downhill as you head back to the reservoir for the race finish.

This race takes you through Colorado National Monument, whose stunning multi-colored rock formations and canyon walls span more than 20,000 acres near Colorado’s border with Utah. Named for the Colorado River, the park is known for its gorgeous views along Rim Rock Drive, the sole paved road through the park, which starts in nearby Grand Junction and winds uphill and downhill through the park’s canyons, all the way to where runners will cross the finish line for the race in Fruita. (The half marathon route, however, is all downhill.)

Voted the state’s number-one half marathon several years ago by Colorado Running magazine, this race offers stunning views of the iconic peaks of Horsetooth Mountain and Arthur’s Rock, along a course with paved surfaces and bike trails, including some steep hills. You’ll need to be ready for high elevations at this race — the course hits a peak of just over 5,600 feet above sea level at its first big hill (the appropriately named “Monster Mountain”), and finishes at just under 5,000 feet.