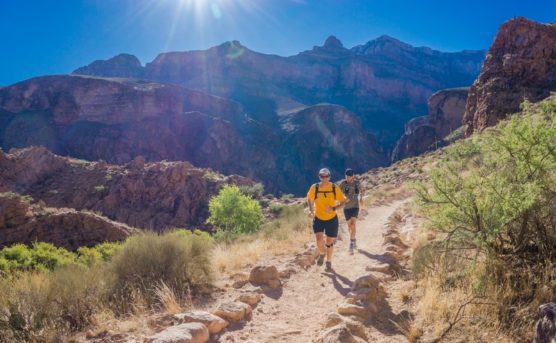 Photo by Brian Erickson on Unsplash.

“There are as many reasons for running as there are days in the year, years in my life. But mostly I run because I am an animal and a child, an artist and a saint. So, too, are you. Find your own play, your own self-renewing compulsion, and you will become the person you are meant to be.” — George Sheehan

1) Across the Years Multi-Day Running Festival

Are you ready for 10 days of running? If you have the time to spare and are up for the challenge, you too can take part in this event that’s achieved legendary status among Phoenix runners, where you can run as many miles as you want, at any speed you want. There’s a marathon challenge — run 10 marathons in 10 days — and an ultramarathon challenge to go with it; there are also 72-hour, 48-hour, 24-hour, 12-hour and 6-hour races; and even a “Last Person Standing” event that’s exactly what it sounds like. All races start from Glendale’s Camelback Ranch baseball spring training facility, at a time of year when temperatures average between the upper 30s and the mid 60s.

You’ll get the chance to run through the “Valley of the Sun” at this fast, flat race that starts and finishes next to the Arizona State University campus. The half marathon follows a very gradual point-to-point loop route that gains less than 200 feet over the course of your first 10 miles; after the 10-mile marker, the race descends by roughly the same amount as you make your way to the finish line. (Though the course has changed some since the record was set, Haile Gebrselassie set the then-world-record for the half marathon here in 2006 with a time of 58 minutes, 55 seconds.)

Dramatic landscapes and gorgeous scenery await the more than 2,000 runners who take part each year in this challenging, hilly, high-elevation race, which takes participants through the heart of central Arizona’s red rock spires and mountain valleys. This race is filled with hills — from the starting elevation of about 4,450 feet above sea level, the course rises and falls to a low of about 4,300 feet and a peak of just over 4,650 feet above sea level.

A beautifully scenic and challenging race that has won raves from publications like Runner’s World in years past, this race offers a rugged desert course with mountains towering over you from all around, and a far smaller field of participants than bigger-city races.

You’ll start this race with silence, followed by the sound of Navajo prayers and drumming as you head into the stark, awe-inspiring desert wilderness of Monument Valley Tribal Park, which lies at nearly 5,500 feet above sea level near the Arizona-Utah border (where countless car commercials and movie scenes have been filmed). You can choose among the 50-miler, 50K and a half marathon, all of which are run entirely on dirt trails through the 91,000-acre park, and “include very challenging terrain and climbs in one of the planet’s most dramatic landscapes.”

A tough, challenging run along the trails of White Tank Mountain Regional Park, whose mountainous 29,000 acres look out onto a panoramic view of the city of Phoenix below. This race too offers several distances — 50 miles, 50K and 30K in addition the half, plus an 8K and a fun run for kids — all of which unfold on single-track trails, on which organizers say you should expect “typical desert trail conditions including rocks, sand, cactus and gravel.” You’ll make some steep ascents as you run through Mesquite Canyon, Willow Canyon and Slick Rock Canyon, and finish with a descent in the final couple of miles — overall, the 13.1-mile course offers up more than 1,700 feet of elevation gain.

Part of a weekend of races that also feature a 50K, 50-miler and even a 100-miler — the latter two of which take runners into the slot canyons for which this area has become famous, as well as a run along the famed bend in the Colorado River known as Horseshoe Bend — this trail half marathon runs along the Page Rim Trail, a 10-mile-long running and hiking trail that circles the city of Page, Ariz. You’ll run first around a slickrock formation after the start and then head onto the trail, where you’ll get to see Lake Powell and Glen Canyon Dam off in the distance from the route.

A gorgeous and challenging run along the high desert trails that surround this city in central Arizona, which was once the capital of the Arizona territory and where you’ll never be far from its famed Whiskey Row downtown. The race unfolds along the Prescott Circle Trail, which makes a 54-mile-long loop around the city — you’ll start the half marathon at Prescott’s Watson Lake Park, and from there head out onto a mix of “fast single track, technical granite rock, and steep scrambles,” organizers say. If you’re up for more than 13.1 miles, the race also offers a 33K, 60K and 88K (as well as a 10K).

If you love the desert, this race offers panoramic, breathtaking views within the Grand Staircase-Escalante National Monument, along a point-to-point route between Page and the Utah-Arizona border, overlooking the lake. You’ll descend about 600 feet between the start and the finish line at the marina on the lake.

A run through one of the most beautiful desert landscapes in the American Southwest (and coincidentally, a place I just visited a couple of weeks ago). You’ll start and finish this race surrounded by saguaro cacti in Tucson Mountain Park, whose 20,000 acres are filled with more than 60 miles of trails and where you’ll get to see mountains off in the distance above the desert, with nothing but a ribbon of highway running through it. Get there by driving south from Tucson past Saguaro National Park and over Gates Pass; the race unfolds past the Arizona Sonoran Desert Museum and features “many hills and steady grades, but that means there are fast downhills, too,” organizers say.

An almost all-downhill run that starts just a short drive from Biosphere 2, the fully-enclosed earth science research facility in the Arizona desert, where researchers study farming and technology and humans’ interaction with nature. From there, the 13.1-mile race — officially titled the Damascus Bakeries Half Marathon — follows Highway 77 for about nine miles, in the shadow of the nearby Santa Catalina Mountains. The only hills of any size come around mile 11, and you’ll cross the finish line just north of Catalina State Park, at the Golder Ranch Fire Station.