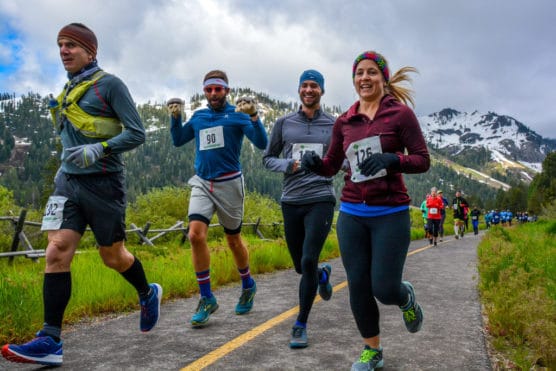 “Something magical happens when you take control of your thoughts. You realize you are your own creation. Moment to moment, who do you want to be?” — Deena Kastor

Sure, I might be a little biased because this one is run in my hometown. But you get to see virtually every major Atlanta neighborhood when you run this one, from trendy Buckhead and Virginia-Highlands to Sweet Auburn downtown near the King Center, where a choir came out to sing for runners the last time I ran.

Run through America’s first military academy at this race — and around an important place in American history, the school Thomas Jefferson helped create with one of his first official acts as president in 1801 and which was hugely influential in the development of higher education in the U.S.

Voted the state’s number-one half marathon several years ago by Colorado Running magazine, this race offers stunning views of the iconic peaks of Horsetooth Mountain and Arthur’s Rock, along a course with paved surfaces and bike trails, including some steep hills.

If you’ve ever taken a drive along California’s famed Highway 1, then you know what you’ll find here — huge, rolling green hills and mountains overlooking the rocky Pacific coastline, with bridges that span the canyons along the coast and wineries and vineyards tucked into the hills just beyond the edge of the land.

Named one of America’s most scenic races by Trail Runner magazine, this race takes runners on a tromping, hilly run through Wisconsin’s Kettle Moraine State Forest, along a series of single- and double-track trails, along a combination of soft, grassy trails as well as twisting, hilly runs through the woods.

More than 25,000 runners take to the streets of Brooklyn each May for this race, which unfolds through many of Brooklyn’s most famous sights and attractions, including Prospect Park, the New York Aquarium and the Coney Island boardwalk.

Run along the rural highways of this gorgeous, scenic island just north of the Strait of Juan de Fuca off the coast of Washington state, this race offers a course filled with rolling hills and jaw-dropping views of one of the most peaceful, serene places in the country.

Run among the gorgeous mountains and rolling back-country roads of Montana’s Helena Valley at this early summer race, whose course is framed by the Big Belt Mountains that overlook the city to the nearby Gates of the Mountains Wilderness, the Helena National Forest, and the Continental Divide.

Set for its annual summertime running among the roads and trails of California’s famed Squaw Valley Ski Resort (the home of the 1960 Winter Olympic Games), this race unfolds among some of the most stunningly beautiful mountain scenery in Northern California.

You’ll run this race along the recently completed Black Diamond Trail, an 8.5-mile-long rail trail that was once the home of the Black Diamond Express, a luxury passenger service on the Lehigh Valley Railroad that ran from New York to Buffalo until 1959.

Selected by Runner’s World magazine as the half marathon with the “best finish,” due in no small part to the festival that awaits runners at the finish line, this race offers some of the country’s most beautiful and dramatic scenery for a race.

This summertime race takes runners through the heart of the forest on Michigan’s 13,500-acre Grand Island, which lies a half-mile ferry ride off the coast of nearby Munising and has been kept in its natural state to protect its forests, coastline and beaches.

Ever wanted to run up the Colorado mountain that holds such a special place in the minds of outdoor enthusiasts around the world? You’ll top out at just over 14,000 feet above sea level by the time you reach the peak, to celebrate one of the most difficult (and satisfying) accomplishments you can achieve in the world of running.

This race along Block Island Sound is not only pretty flat and fast, but it’s gorgeous too. You’ll run past rocky coastlines, Victorian summer homes, oceanfront marshes and beautiful cottages. There are a few tiny elevation changes, but runners never go above 50 feet above sea level in elevation anywhere along the route.

Run the only race of its kind that actually runs through the grounds of a U.S. national park — Maine’s Acadia National Park — at a time when the autumn leaves are turning brilliant shades of orange, red and gold.

You’ll run almost entirely along the shores of Lake Michigan here in the Windy City for this race — much of it along Chicago’s famed Lake Shore Drive —  which is one of the biggest halfs in the country and well worth it if you like big-city running.

Nestled in the heart of Kentucky’s bluegrass country — at the midpoint of the railroad line between the cities of Lexington and Frankfort — this early fall race features a route that shows off the state’s rolling green hills and thoroughbred horse farms.

Ever wanted to have the chance to run on a major league baseball field? You’ll get the chance to circle the track around the ball field at Miller Park and take a tour of the second largest brewing company in America after the race.

This race takes runners through Antietam National Battlefield Park, the site of the 1862 Civil War battle that was the bloodiest one-day battle in U.S. history, where more than 22,000 soldiers were killed or wounded in a single day.

Full of rolling hills, stunning ocean views, and beautiful southern California weather, this race is a perfect late fall race to squeeze in before winter arrives, and unfolds around the Palos Verdes Estates Shoreline Preserve, including stretches around Agua Amarga Canyon and along the shoreline of Lunada Bay.