What’s the Best Time of Day to Run? 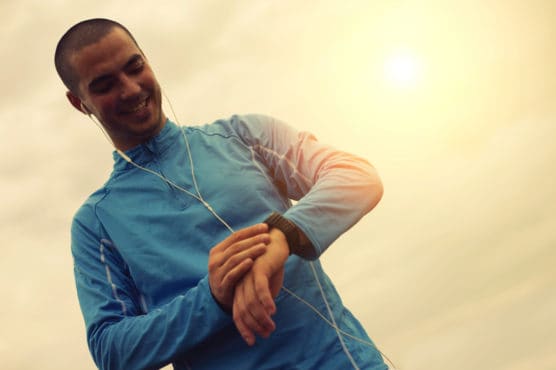 Morning, afternoon or evening — when, exactly, is the best time of the day you should go for a run? While there may be an optimum time of the day for aerobic exercise, runners may have a tricky time finding what works best for their own personal situation.


From a purely scientific standpoint, numerous studies have lead researchers to the conclusion that circadian rhythms of the body make late afternoon the best time for cardiovascular exercise.

Studies published in Ergonomics, the Journal of Physiology, and at the American College of Chest Physicians have all indicated that peak performance occurs in the period from 4 p.m. to 8 p.m.

The body’s temperature and hormone levels are highest in the late afternoon, creating the optimal ratio of testosterone to cortisol. Many of the studies have shown performance tests of endurance, strength, and aerobic capacity produce optimal results during this time period.

However, many runners are apt to run early in the day before everything else takes precedent. Core temperature and flexibility is low, but the physiological benefit often is outweighed by the psychological benefit.

Finishing a run before work, school, or errands is often key for many runners to stick with their routine. Those who compete in races find that regular morning running helps with early morning start times.

But afternoons are great for certain kind of workouts and races–such as speed work or racing any distance up to a 5K. Running coaches like Mark Deckard and Roger Tubbs agree. Deckard states, “speed work seems to be better in the mid to late afternoon when the muscles are already warmed up from the day’s activity.”

And Tubbs sees better results from the kids he coaches. “I’ve seen kids perform much better in the 800, 1600, and 3200 in the afternoon. I believe that it’s because core temps are already up, and they can go all out more easily.”

So what’s a runner to do?

If there is enough flexibility in your schedule to perform speed work in the afternoons and long runs in the morning, this is the optimal combination for those training.

Afternoons will allow your body to maximize the physiological benefits of speed work whereas morning long runs will routinize race day conditions.

For maintenance and recovery runs, the benefit of running in the afternoon is not noticeable enough if you are a morning runner. These are the runs you can do whenever you can squeeze them into your schedule.

Is there a bad time to run?

Circadian rhythm studies indicate that sleep can be disrupted easily if performing aerobic activity in the late evening. Because sleep is such an integral part of the recovery process, a late jaunt might do more harm than good.

That being said, each person has a slightly different body clock and night owls might be able to squeeze in a run at 10 p.m. without issue. But it is generally agreed upon that running during the late night or extreme early morning is not beneficial.

The reality is that most of us have many other commitments throughout the day and run when it is least disruptive. Changing routines might make for better runners, but those routines make honest and consistent runners.

Next post: The Best Time of Year to Train For a Half Marathon