The weather conditions can be as challenging as the terrain and the elevation change at the early springtime running of Salida’s annual Run Through Time Marathon, Half Marathon & 2-Mile Run, which takes runners along the historic and spectacularly scenic Ute Trail.


Runners follow the trail as it winds up the mountains just to the northeast of this southern central Colorado town, whose friendly, unpretentious atmosphere and abundant opportunities for outdoor recreation have garnered it raves from publications ranging from Outside Magazine to the New York Times.

With its very steep and challenging route, which in some years is dry with sunny weather and in others is covered in snow that can be two to three feet deep, the loop race starts and finishes at Riverside Park in downtown Salida, which lies along the banks of the Arkansas River that flows through the town.

From there, runners start off relatively easily compared to what the rest of the course brings, running approximately 2.6 miles on packed dirt roads and highways before the hills begin. Runners are encouraged to enjoy the easy part of the race, but don’t let the ease fool them–the elevation is coming soon enough.

“Soon enough” arrives after starting on a rough and road to the Sweet Dreams trail, where a steep climb (500 feet in 1 mile) begins. The course levels out (relatively speaking, that is) once runners head north onto the Backbone and Sand Dunes trails before another equally challenging climb starting near the Mile 7 marker.

Turning on the Pauli Trail marks the start of the return to the finish line, as well as completing the uphill climb. Don’t be fooled by the name of the next trail; even though Unkle Nazty is run downhill for this portion of the race, there are several difficult solid rock drops, so be careful here.

The return takes runners mostly downhill on a variety of shorter trails, as well as on a stretch of dirt road, before returning to the finish line at Riverside Park.

Whether the course conditions are dry, as they were at the race’s 2007 running, or covered in snow as the route was in 2008, runners can enjoy the heated log cabin waiting for them at the finish line. 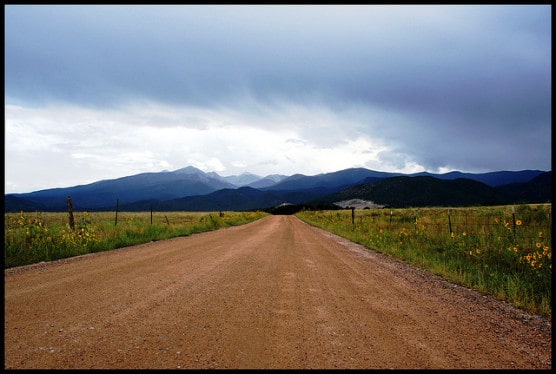 In the Arkansas River Valley near Salida, Colorado. (Photo by Kristine Johnson/flickr)

Runners need to be prepared for cold temperatures and possibly heavy snow in the early spring in Salida, which lies nearly 150 miles southwest of Denver. In March, average temperatures range between 19°F and 52°F, while record temperatures have fallen as low as -21 degrees (in 2002) and risen as high as 77 degrees (in 2004).

See the race route map for the Run Through Time Half Marathon here.

To reserve your spot in the 2020 running of Salida’s Run Through Time Marathon, Half Marathon or fun run race, visit the event website below.

Ever run in the Run Through Time Half Marathon? Share your impressions here, or post your review in the Comments below.