Ready for a seriously high elevation race, through some of western Montana’s most beautifully scenic mountains? You’ll need to be ready for high mountain running at the Madison Marathon, Half Marathon and team marathon races, which unfolds along a point-to-point course that averages over 9,000 feet above sea level throughout most of the route, and features some of the most spectacular natural beauty in the western United States.

The area known as the Beaverhead Deerlodge National Forest in Montana’s southwestern corner is the setting for the race, which unfolds along a 13.1-mile course (for those running the half marathon) that starts at the base of Black Butte Mountain in the national forest area, and follows Gravelly Range Road (also known as National Forest Service Road 290) all the way to the race finish line at the Clover Meadows Campground, which lies about a 35-mile drive from downtown Ennis.

The race organizers and sponsors say that this race is the nation’s highest-elevation marathon race, and perhaps is the highest of its kind anywhere in the world — while the Everest Marathon in Nepal starts at 17,000 feet above sea level, that race actually is a trail race, while the Madison Marathon & Half Marathon is a road race, organizers add, as it unfolds over a gravel road from start to finish.

Runners who take part in this event will no doubt experience a race unlike any they’ve ever taken part in. From the wildlife runners can expect to see along the course — which may include bears, deer, elk and coyotes — to the occasional flocks of sheep that roam in the hills and mountains among the forest, this quiet, peaceful run through the Montana wilderness offers a stark contrast to the bustling quality of big-city races.

Some of the highlights along the race include not only Black Butte Mountain, which rises over 10,000 feet near the starting line area, but also Monument Ridge, which runners reach after a long, steep uphill climb through the early and middle miles of the half marathon portion of the race.

After the half-way point, which occurs just after runners have passed Monument Ridge, the course flattens out and later offers ample downhill stretches, and also opens up with views of what “Big Sky Country” is all about, from rolling meadows and wildflowers along the mountain ridges to the big blue sky overhead. 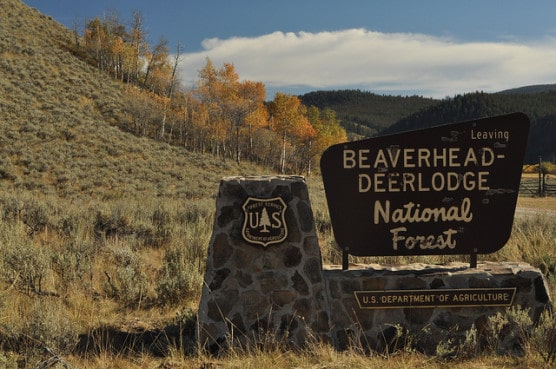 The race has one last uphill stretch between mile markers 10 and 11, and then (perhaps mercifully!) features a gradual descent over the last couple of miles into the finish line at Clover Meadows.

Those running the full marathon aren’t done yet, as they continue on another 6.5 miles past Clover Meadows to their turnaround point, and then head back to the campground for the finish.

Located in the southern corner of western Montana, just over 50 miles southwest of Bozeman and just under 200 miles southeast of Missoula, Ennis typically sees its warmest weather of the year in the mid-summer season.

See the race route map for the Madison Half Marathon here.

To reserve your spot in the 2023 running of Ennis’s Madison Marathon or Half Marathon race, visit the event website below.

Ever run in the Madison Half Marathon? Share your impressions here, or post your review in the Comments below.