This small central southern Nebraska city — which proclaimed itself the “sandhill crane capital of the world” in 2010 thanks to the more than 500,000 sandhill crane birds that converge here in the early spring as a pitstop on their annual migration northward — plays host to the 13th annual running this year of its Buffalo County Stampede Half Marathon.


Sponsored by Kearney’s Buffalo County Historical Society, the race saw just over 170 runners cross the finish line at its 2014 running, which unfolds along the paved, eight-foot-wide pathways of the city’s Kearney Hike & Bike Trail, a 17-mile-long system of trails that wind through the city and the Platte River Valley area all around.

Runners start the loop course for the race in front of the offices of the historical society, at 710 West 11th Street, which also lies near the city’s Rails & Trails Museum.

From there, runners head west toward Yanney Heritage Park, an 80-acre park on the southwest section of the city that’s been transformed from a cornfield into a park complete with an amphitheater, gardens, children’s playground areas and a lake and wetlands preserve.

Once runners reach the park, they then turn onto the Hike & Bike Trail and head south toward the Platte River.

Runners continue on the trail as it winds along the riverbank, heading eastward with the winding river for just under two miles before turning around and heading into downtown Kearney all the way back to the finish line along West Street in front of the Rails & Trails Museum. This being Nebraska, the terrain is largely flat and paved for the entire route. 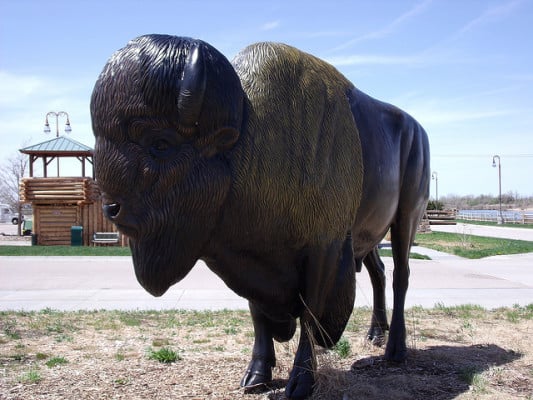 Statue of a buffalo in front of the Great Platte River Road Archway in Kearney, Nebraska. (Photo by Danzil Raines/flickr)

Nestled along the northern bank of the Platte River that winds through the southern half of the state next to Interstate 80, just over 180 miles southwest of Omaha, Kearney typically sees mild to moderately warm weather in June, when record temperatures here have fallen as low as 35°F (in 1935) and risen as high as 108°F (in 1988).

See the race route map for the Buffalo County Stampede Half Marathon here.

To reserve your spot in the 2022 running of Kearney’s Buffalo County Stampede Half Marathon or 5K race, visit the official race website.

Ever run in the Buffalo County Stampede? Share your impressions here, or post your review in the Comments below.