More than 2,000 runners cross the finish line each year at the annual late winter running of the El Paso Marathon, Half Marathon & 5K, with 1,000 or more of those runners in the half-marathon alone, which takes the field on an out-and-back loop course from the start in Anthony Park and runs through the city and back to the finish near the banks of the Rio Grande.


Nicknamed “the Sun City” and “Land of the Sun,” El Paso is most definitely a sunny city — it gets more than 300 days of sunshine each year — so participants should arrive prepared for the race with shades and sunscreen, even in February.

The newest course layout, which debuted in 2018, starts downtown in Southwest University Park, at the corner of Durango and West Franklin, just a couple of blocks down from the El Paso Convention Center.

From there, the half marathon — officially titled the TFCU Half Marathon — takes runners mostly northeast through the city, starting off with stretches along East San Antonio Avenue and Myrtle Avenue. After runners make a right turn onto Campbell Street, they follow Campbell north to Wyoming Street, where they turn right and begin a long, straightaway stretch that takes them through El Paso’s Five Points neighborhoods.

The rest of the half marathon course is basically a retracing of the steps runners have already made, in reverse back to Southwest University Park for the race finish. The terrain for the race is entirely paved surfaces, as it is run on city streets, with a combination of some challenging hills in the middle section of the race and even, flat terrain in both the first few and last few miles.

The elevation in El Paso is about 3,800 feet above sea level, and all three races start at 7:00 AM — and the half marathon features a 4-hour time limit. 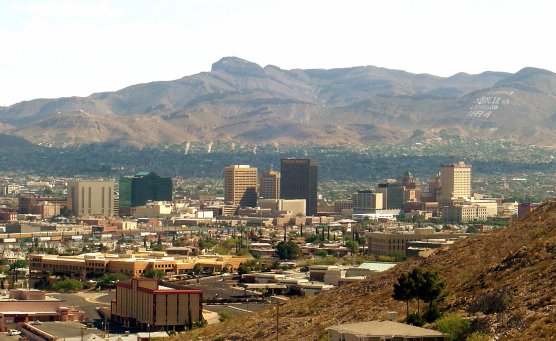 The El Paso skyline, with the Franklin Mountains in the background. (Public domain photo by Wikimedia)

Nestled right across the border with Mexico and the nearby city of Ciudad Juarez, El Paso typically sees plenty of sun and mild to cool weather conditions in the late winter season, with little to no rainfall.

In February, temperatures average between 37°F and 63°F — on the day of the race (Feb. 16), the average low is 39°F and the average high is 65°F — while precipitation totals average just under half an inch for the month.

See the race route map for the El Paso Half Marathon here.

To reserve your spot in the 2020 running of the El Paso Marathon, Half Marathon or 5K race, register online at RunSignUp.com here.

Ever run in the El Paso Half Marathon? Share your impressions here, or post your review in the Comments box below.