Now with three decades as a running tradition here on this military base just to the northwest of nearby Newport News and Norfolk, Va., Fort Eustis’s Mulberry Island Half Marathon & 5K Runs makes its 38th annual running this fall, for a race that usually draws more than 250 runners for both races combined.

The event is a fall counterpart to a 10K race that the organizers at the base hold each year in the spring, and both races feature out-and-back courses that start and finish at the Anderson Field House recreation center, located on the base at 643 Dickman Street.

From there, runners follow the route along stretches of the nearby James River, where runners can look out onto the “ghost fleet” of ships out in the bay just off Mulberry Island. They’ll get to know an Army base that was built back in 1918, and which has served as a training facility, a work camp and even as a prison at various times in its history.

Runners will follow the course as it unfolds along Lee Boulevard to Taylor Avenue, and then from Taylor to Harrison Road, which they’ll follow all the way down to the race’s first turnaround point. Then they’ll run back up Harrison to Back River Road, where they’ll turn right to head east toward the Pines Golf Course at Fort Eustis.

After that, the next stretch leads them down to the second turnaround point on Mulberry Island Road, running past marshes and creeks as well as the Fort Eustis archery range.

The final stretch heads back toward the golf course, and back to Taylor Avenue and Lee Boulevard for the finishing stretch in front of the Anderson Field House. 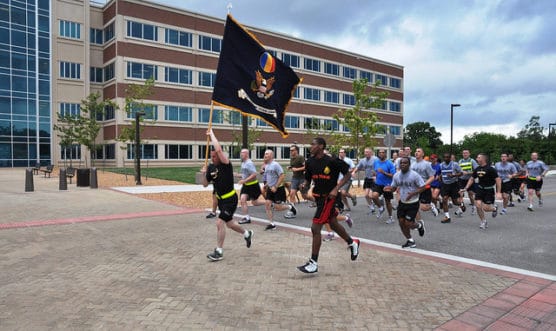 Located in the southeastern corner of Virginia, roughly 65 miles southeast of Richmond and about 20 miles northwest of Newport News, Fort Eustis typically experiences mild to moderately warm weather in the early fall, and usually sees its heaviest rainfall of the year in July, August and September.

The city’s average monthly temperatures in September range between a high of 82°F and a low of 60°F, while rainfall totals average just under 5 inches for the month.

See the race route map for the Mulberry Island Half Marathon here.

To reserve your spot in the 2022 running of Fort Eustis’s Mulberry Island Half Marathon or 5K, register online at EventBrite.com here.

Ever run in the Mulberry Island Half Marathon? Share your impressions here, as well as anything you learned about the race that you think other runners/walkers should know.