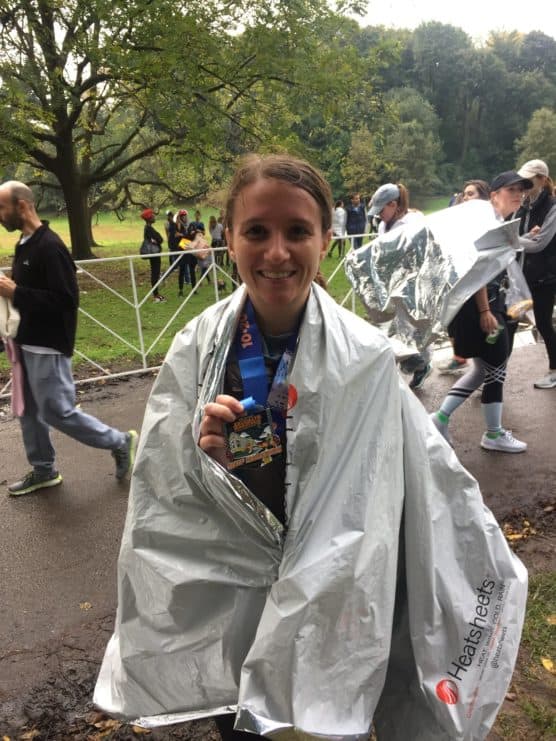 Laura Dattaro at the finish line of the Brooklyn Half Marathon.

It was around the end of the tenth mile that the thought first occurred to me, much to my surprise and entertainment. The early morning rain that had quieted before the race had returned as a light mist, keeping me cool as the rising sun started to warm the air.

Unhappy with how I’d all but abandoned my final month of training, I had set a goal of finishing 9 miles without stopping, and here I was pushing 10, my legs feeling good, my breathing steady, my mind calm, even happy.

And so I laughed out loud when the thought first hit me: “Holy shit, I am going to finish this race.”

Nothing, really, could have surprised me more.

I’m a relative newcomer to running, starting less than three years ago from an essentially sedentary—and not particularly health-conscious—lifestyle. Since quitting figure skating as a high school freshman, the closest thing to a sport I participated in was marching band, and I hadn’t done even that in more than a decade.

Athleticism, to me, meant a particular kind of identity, one that didn’t match mine. I was a writer-type, a book nerd, an introvert; my tribe preferred to break a sweat from sipping warm beverages in cozy sweaters, not pounding pavement or putting in hours on the treadmill.

There was always something in me that wanted it to be different. Throughout my twenties, I tried to make a change. I signed up for a gym, where a trainer taught me to balance on a BOSU ball (after, of course, explaining what a BOSU ball is).

I joined the Y and went swimming, which I’d loved as a kid but apparently did not love enough to keep doing after a layoff meant my daily commute no longer passed by the pool.

I relished kickboxing classes, both for the catharsis they provided and for getting me closer to defined abs than I likely ever will be again. But almost like clockwork, about three months in, I’d get bored, lose interest, give up. This stuff wasn’t for me.

And then one day, a few years ago, I decided to go for a run. As an anxious person, I usually overthink new things until I think myself out of them—is this the right decision, what equipment will I need, what if I do it wrong, what is the point of all of it?

But this time, I didn’t think. I didn’t need a book or a website to tell me how to do something I’d learned to do on my own as a toddler. I didn’t need an instructor or a gym or anything more than shoes and comfortable clothes. I just went outside and moved my feet faster than usual. And I liked it, so I did it again.

When I wanted to go farther, I signed up for a 5K as motivation. I did another one, faster, and found myself wanting more. After each milestone, each new distance achieved—four miles, then five, seven soon enough—I felt a kind of joyous surprise at myself, matched by a deep and growing sense of pride.

It came from more than the achievement itself. More even than that I had, for once, stuck with something new for over a year, instead of giving up at the first sign of difficulty or fear of failure. The deepest pride came from feeling that I had been open to changing the way I see myself. 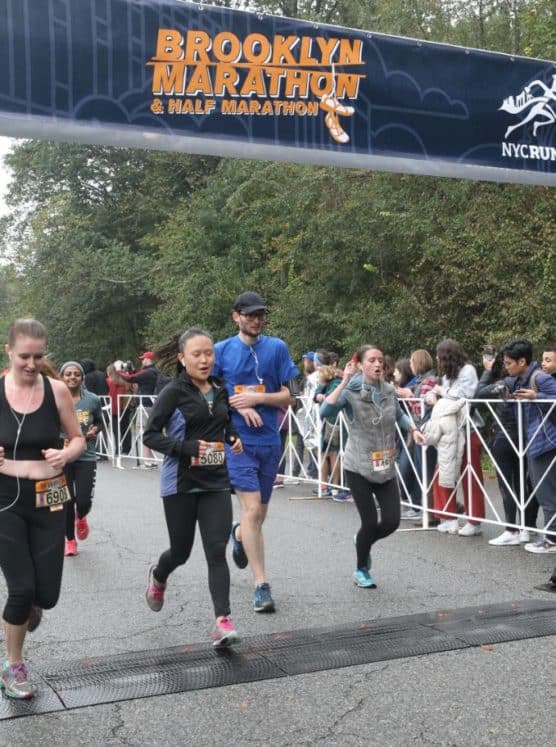 Crossing the finish line at the 2018 Brooklyn Half Marathon. (Laura Dattaro)

Every time I went for a run, I was shutting down an internal voice saying that this wasn’t for me, I didn’t belong here. Even more importantly, I was allowing myself to fully enjoy something without judgment, even though it threatened my self-conception.

It may seem counter-intuitive to be fearful of adding happiness to your life, but we cling to even the worst parts of our identities, because they’re comfortable, and because we fear who we might be without them.

Internal voices can be louder than we think

With each run, I discovered more parts of myself that I didn’t know, and discarded ones I had once strongly believed in. When I thrilled at finishing in the top fifth of my age group at my first 10K, I realized I was wrong about not being competitive.

When I forgoed social plans so I could wake up early enough to squeeze in a long run before the summer heat set in, I realized I was wrong about not being disciplined.

When I found myself spending a good portion of a party talking to marathon-running friend about energy gels and deep core exercises, I was realized I was wrong about—well, okay, clearly I was still a nerd, but a more adaptable one than I had thought.

I also realized it was time to run a half-marathon.

After months of training, pep talks, bad runs, early morning arguments with myself, a lot of carbs, a last-minute snag involving friends who missed bib pickup, and two hours and 10 minutes of nonstop running, I crossed the finish line of my first half.

I was nearly in tears—pride, relief, pain, astonishment, and pure joy all swelled through me at once, an overwhelming and, I’m now finding, addictive sensation.

What happens when you discover you really can do it

The two hours had, surprisingly, flown by. With a 7 am start time, we had lined up in the corrals before sunrise, stepping nervously over the starting line into the streets of Brooklyn just as the sky began to lighten on the horizon.

The full impact of what I had signed up for hit me on the race’s first downhill; the open road sloped up again in the distance, giving me a clear view of the thousands of racers ahead.

We traversed Brooklyn roads for the first 10 miles, delighting in running on an empty highway before entering Prospect Park for a hilly finish, where I hit new levels of runner’s high: I was aware my body hurt, but the pain felt distant, as my mind relaxed into a feeling I can only describe as Zen until I hit the final half-mile, when all I wanted was to cross that finish line.

It was the end point of the journey I’d started more than six months prior, when I decided to sign up for this thing I wasn’t sure I could do.

But in the days following, when my race group and I recounted stories and my body started to heal and I already found myself checking upcoming race dates against my calendar, that I realized it was more like a beginning, as so many endings are.

It’s the start of a bigger version of myself, of the ability to be who I am and to call myself a runner. It’s the start of a time when things that once seemed impossible, off-limits, not for me, now look more like challenges and adventures.

And I can’t wait for the next one.

Laura Dattaro is a New York-based science journalist, writer and producer. She’s also written posts for us including “Why You Need to Be Careful Running Outside in the Cold.”

Next post: 10 Thanksgiving Day Half Marathons You Can Run